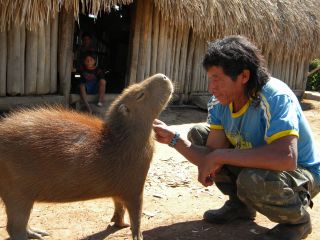 Richard Muller, a physicist at Berkeley and a founder of the Berkeley Earth Surface Temperature project, used to be a skeptic on climate change. His analysis of climate data changed his mind; today he, like the overwhelming majority of scientists, believes that climate change is real and caused by people. But, also like most scientists, Muller's evidence comes primarily from the statistical analysis of large numbers of temperature observations over many years, not from direct observations of nature.

Ntôni Kisêdjê, leader of the Kisêdjê people in the Xingu river basin in Mato Grosso, Brazil, has a different perspective. Ntôni is a traditional healer and a highly skilled forest farmer, and like most of his peers across the Amazon he pays very careful attention to what the myriad plants and animals of the forest are doing at different times of the year, and to the weather.

"Before, when the little group of stars [the Pleiades] came out at sunset, and the muricí (Byrsonima crassifolia) flowered, it was the time to make gardens," Ntôni told a seminar on agriculture and climate change in Cuiabá, the capital of the Brazilian state of Mato Grosso. "People would clear their gardens, then the rains would come. We can see that this has changed."

What Ntôni is seeing is dramatic. And he's not alone. There are 15 other indigenous groups who live in the vast Xingu National Park and they, too, like Indians throughout the Amazon, time their yearly farming cycle to the appearance of the Pleiades at sunset, a reliable signal of the end of the dry season and the beginning of the rains needed for crops to grow. This is part of the indigenous groups' oral traditions, handed down over hundreds of generations. If the rise of the Pleiades has indicated the start of the rains for thousands of years, and now is no longer a reliable signal, this is itself probably a sign of climate change.

Ntôni and other people in the Xingu also say that the way fire behaves in the forest has changed. The peoples of Xingu have used fire as a landscape and resource management tool for millennia, to clear forest to plant crops, add nutrients to soil, clear trails, collect honey and encourage the growth of useful plants. But, Ntôni says fires that used to burn only forest that was cleared for gardens now, in dry years, may run out of control over large expanses of forest that used to be too moist to burn. This, too, confirms what Western science suggests are some of the first effects of climate change in the Amazon.

Ntôni's people and the other indigenous groups in the Xingu live in forest that's in between dense moist Amazon forest to the north and the drier tropical savanna to the south. The sort of data-driven climate models that scientists like Muller work with predict that such land, on the border between forest and grassland, is highly vulnerable to climate change. Drought, and the wildfires that come with it, could turn the forests of the Kisêdjê into savanna.

In the last 20 years, the forests of the upper headwaters of the Xingu have been cleared for cattle ranching and soy farming, so today, the Kisêdjê and the other peoples of the Xingu Park live on an island of forest in a sea of deforestation. In dry years, fires that ranchers and farmers set to burn forest or old pasture increasingly sweep into indigenous territories. The Instituto Socioambiental, one of Environmental Defense Fund's partners in Brazil, is helping the Xingu indigenous groups learn how to control and combat those fires, but they know that burning fossil fuels and deforestation far beyond their territories are behind climate change. [Deforestation: Facts, Causes & Effects]

For Ntôni and his people, climate change is now part of the fabric of their daily lives. They see the changes and know more are coming. Their hope is that people in the developed world will come to share the Kisêdjê's sense of urgency in dealing with the root causes of this global threat — including deforestation.

As Ntôni says: "Bad things can happen to people who cut down lots of forest, and they may not even know it."