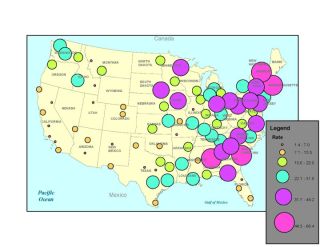 The ADHD medication Adderall is infamously abused as a study drug, and indiscreet tweets can apparently help scientists learn about when and where college kids are popping the prescription stimulant.

Researchers from Brigham Young University analyzed public tweets about Adderall between November 2011 and May 2012. They found that mentions of the drug on Twitter spiked sharply during finals periods, peaking on Dec. 13, 2011, and April 30, 2012. Though their analysis didn't separate legal and illegal uses of the drug, many of the tweets made a study reference, the researchers say. And geographically, there were more tweets about Adderall coming out of college and university clusters in the northeast and south regions of the United States, the study found.

Nearly 1 in 10 of all tweets about Adderall also mentioned other stimulants and substances including alcohol, coffee, Red Bull, cocaine, marijuana, methamphetamines and Xanax. "Tweets hinting at co-ingestion are particularly troubling because morbidity and mortality risk increases when substances are combined," study researcher Michael Barnes said in a statement. The findings were published the Journal of Medical Internet Research.