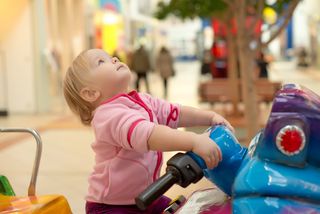 Nervous parents may fret about dangerous-looking roller coasters with precipitous drops, or rusty Ferris wheels in traveling fairs, but it turns out that for young children, coin-operated rides in malls and restaurants may be more of a cause for concern than expected, according to a new study.

Researchers found that 93,000 children went to emergency rooms for injuries related to amusement rides between 1990 and 2010, or about 20 injuries daily.

Of these injuries, 11,000 were from small, coin-operated rides, which were much more likely to cause injury in children ages 5 and younger than in older kids.

"I didn't expect that number of injuries to be due to mall rides," said study researcher Dr. Gary Smith, director of the Center for Injury Research and Policy at Nationwide Children's Hospital in Columbus, Ohio. "This problem isn't on the radar screen."

Smith and his team examined records from about 100 emergency rooms across the United States, and considered all cases of injuries that involved roller coasters, bumper cars, merry-go-rounds, log flumes, alpine slides, mechanical bulls, mini-trains and coin-operated rides. The researchers did not include injuries from bouncy houses, go-carts, bungee-related rides and ball pits, as they didn't fit the traditional concept of a ride.

The data showed that the number of these injuries spiked during the summer, when most families visit fairs and amusement parks.

The most common way children got hurt was from falling in, off or against a ride, and the most children hurt their heads or necks.

Rides at restaurants and malls may be dangerous for young children because they are over hard surfaces, and lack child restraints, Smith said. Young children, who have proportionally larger heads and thus a high center of gravity and poorer balance, may have a hard time staying on these rides.

He advised parents to think twice about putting young kids on a ride that's over a hard surface, and if they do, to monitor the children closely, standing close with an arm on the child as the ride is moving.

It was puzzling, Smith said, that 55.5 percent of the injuries in the study occurred in girls.

"This is one we didn't expect," he said. "Almost every type of injury you can name, males will outnumber females. I don't know what the explanation is."

Parents will be happy to hear that amusement-ride injuries were rarely serious. Children were hospitalized or held for observation in only 1.5 percent of cases.

"For most consumer-product-related injuries, [hospitalization] is around the 4 percent to 5 percent range, so 1.5 percent means that a large majority of amusement-ride injuries are relatively minor."

However, parents should be vigilant. Smith cautioned that just because a child isn't hospitalized doesn't mean his or her injury isn't painful or bothersome. The study showed that on average, 20 children daily were brought to an ER for a ride-related injury in the U.S. "These are relatively common injuries," he said.

Dr. Lois Lee, a pediatrician in the emergency department at Boston Children's Hospital who was not involved in the study, said these findings illuminate the need for more uniform regulations for coin-operated rides. For instance, she said, more attention should be paid to the child’s age, as well as the surface on which the rides are located.

Ultimately, however, "you need to think about the developmental age of your child — are they able to sit on the ride, get on and off?" Lee said. "Parents need to use common sense."

Pass it on: Smaller, coin-operated rides could be even more dangerous than amusement-park rides, especially for young children.