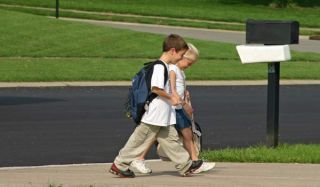 Researchers from the University of Alabama at Birmingham used a computer-generated street intersection to see if 39 children, ages 7 to 10 with ADHD crossed the street less safely than 39 ADHD-free kids.

Previous research has shown that children with ADHD have a greater risk for general injuries, and adults with ADHD tend to be riskier drivers.

"We expected that the kids with ADHD maybe weren't displaying the appropriate curbside behaviors," said study co-author Despina Stavrinos, an assistant professor at the University of Alabama at Birmingham Injury Control Research Center.

But children with ADHD looked both ways before crossing the street, just like the control group. The difference was that they opted to cross under more dangerous conditions.

Close to getting hit

"We looked at, for example, how much time they left to spare. When is the next car coming though?" Stavrinos said. "They were pretty close to getting hit."

The kids in the study were being treated at three local clinics, and had been diagnosed with clinical ADHD. The children stopped taking ADHD medication at least 24 hours before the trials. Researchers controlled for parent education and household income.

Researchers first asked the children to cross a 25-foot distance to determine their average walking speed. Then the kids were acclimated to a virtual street-crossing consisting of three screens and a wooden curb.

On the screens, researchers displayed a virtual road with traffic coming in both directions. For the test, the children stepped off the wooden curb onto a pressure plate when they felt it was safe to cross. Each kid repeated the task 15 times.

Researchers used electronics to record measures of the child's performance — the time between vehicles, the number of hits and close calls, the time left to spare, and how long the child waited to cross the street after the last car passed. Video captured how many times the child looked left or right before crossing.

The children with ADHD looked both ways; however, they crossed when it was less safe. They crossed when the gaps in traffic were smaller, and had less time left to spare when they reached the other side of the street, for example.

The difference is decision-making, Stavrinos said. The kids with ADHD seemed to be acquiring all the same information as the controls, but were less effective at processing that information.

That executive dysfunction played a role in risky street crossings for children with ADHD is no surprise, said Russell Barkley, a clinical professor of psychology at the Medical University of South Carolina.

"ADHD really is a disorder of executive function," Barkley said. "We already knew that."

Barkley explained that executive dysfunction in people with ADHD often affects self-awareness, inhibition, working memory, self-motivation and emotional self-control. Also, people with ADHD have an awareness of time, but have trouble applying time to their own behavior.

"They start to cross the street and they have ten seconds, but they act like they have all the time in the world," Barkley said. "They can't use that sense of time to program what they need to do to get it done. Time is the enemy of anyone with ADHD."

One weakness is that the study authors didn't control for IQ, Barkley said. Children with ADHD score 7 to 10 points lower on IQ tests on average, he said. "They would need to have measured IQ and then corrected for it statistically," he said.

The study is useful because it tells parents that training children to look both ways before crossing a street isn't enough. "You have to monitor ADHD children much more than other children," Barkley said. "Putting them through a safety class isn't going to change that they are unsafe."

In the future, Stavrinos hopes to conduct a similar test with children while they're taking ADHD medication to see if their street-crossing behavior is any safer. She'd also like to follow the children into adulthood to study whether they become risky drivers.

Pass it on: Crossing streets may be more dangerous for kids with ADHD. Parents of these children may need to monitor them more closely.