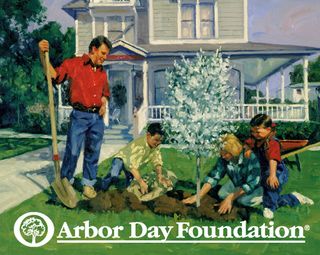 Today is not a holiday that spawns the excitement of Christmas, or even Valentine's Day. But then again, there are no gift-giving obligations or impossible restaurant reservations to make.

Yes, it's Arbor Day, celebrated nationally on the last Friday in April, though some states have their own dates to better coincide with good tree-planting weather. Read on for five quirky facts about this holiday, including its odd roots.

1. The origins of Arbor Day

When you think of trees, what state jumps to mind? California, with its redwoods? Vermont and its sugar maples? How about Nebraska? [Image Gallery: One-of-a-Kind Places on Earth]

Despite (or rather, because of) a naturally treeless prairie landscape, Nebraska is the birthplace of Arbor Day.

The holiday began with journalist Julius Sterling Morton, who moved from Detroit to Nebraska in 1854. At the time, the wide open spaces of the west weren't working out so well for pioneers — the shadeless prairie was hot in the summer, with few windbreaks to keep tilled soil from blowing right into Kansas. The solution? Plant a tree.

Morton rose to become the state secretary, and helped establish the first Arbor Day on April 10, 1872. More than 1 million trees were planted across the state that day.

Arbor Day became a national sensation in 1907, when President Theodore Roosevelt issued a proclamation to school children about forestry and the importance of trees.

2. We really do need trees

Nebraska may not have been a naturally tree-friendly spot, but Morton's heart was in the right place. The European colonists who came to America instituted massive deforestation from the start. The East Coast easily competed with the enormous Redwoods of the Pacific seaboard.

At the time when Christopher Columbus landed in the Americas, "it's said that squirrels could travel from tree to tree from the Northeast to the Mississippi without ever having to touch the ground," Chris Roddick, chief arborist at the Brooklyn Botanic Garden in New York, told LiveScience in 2009. "In the old-growth forests in the Northeast, you had hemlock that were six or seven feet in diameter, chestnut trees 200 feet tall."

Trees sequester carbon that would otherwise end up in the atmosphere, warming the globe, Roddick said. They also provide some of the benefits that Morton was looking for, including shade that lowers the need for air conditioning. Oh, and greening up urban spaces may even improve city dwellers' mental health.

3. And America's national tree is …

America has a national tree, and it's all thanks to Arbor Day. In 2004, the National Arbor Day Foundation hosted a vote on its website for a national tree. The winner pulled ahead early and never flagged: The oak tree.

The National Arbor Foundation isn't just about crowning the prettiest tree of them all. The group, which formed in 1972, distributes some 10 million trees each year and works with the National Forest Service to re-plant lost forests. The group estimates that its donations have funded the planting of more than 20 million trees in forests since 1990.

Americans aren't the only ones digging out the garden spades come spring. In 1895, a retired Connecticut clergyman named Birdsey Grant Northrop went to Japan and brought his love of trees. Northrop had previously researched forestry in Europe, triggering a wave of environmental self-examination back in Connecticut and culminating in the establishment of a state Arbor Day. At 78, Northrop convinced the Japanese Minister of Education to establish Arbor Day in that country. He also evangelized about trees in Australia, Canada and Europe, according to the Connecticut state government.