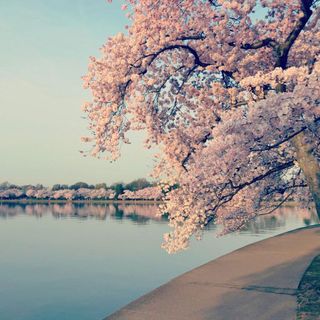 The cherry trees around the National Mall of Washington, D.C., in peak bloom.
(Image: © Deptartment of Interioror)

The pink cherry blossoms that explode into bloom every spring in Washington, D.C., are famous around the country, flowering due to a courtesy gift from Japan more than a century ago. But one of the first attempts to send the flowers over to the capital didn't go so well.

A few seeds did make their way into the United States before the Japanese sent thousands in the 1900s. William S. Bigelow — an American physician living in Japan — and botanist Charles S. Sargent sent cherry trees to the Morris Arboretum in Philadelphia in the 1890s, for example, and the Imperial Botanic Garden in Tokyo added to the arboretum's collection in 1894.

In Washington, D.C., agriculture department official David Fairchild imported 100 Japanese cherry trees in 1906 to his own Maryland property to see how well they grew. [In Photos: Stages of Cherry Blossom Blooms]

Three years later, the Japanese sent more than 2,000 young trees to be planted near the Potomac River as a symbol of the growing friendship between the two nations. The trees were unfortunately infested with roundworms and insects. President William Howard Taft, acting on advice from agriculture officials, ordered the trees burned and destroyed.

Seeking to avoid a rift, the U.S. Secretary of State swiftly sent his regrets to the ambassador from Japan. The island nation renewed its vow to send seeds over, shipping more than 3,000 in 1912. Those trees were healthy and were planted as planned.

Expanding across the United States

The Washington cherry trees have attracted their share of both positive and negative attention over the years. The first cherry blossom festival there took place in 1935, but in 1941, four cherry trees were cut down shortly after the Japanese invaded Pearl Harbor. Officials began referring to them as "Oriental" trees to try to prevent such incidents in the future.

The Brooklyn Botanic Garden planted its "cherry walk" in 1921.

A realtor in Macon, Ga., decided to expand the number of cherry trees in his hometown after visiting Washington, D.C., in 1952. He was "awed by the tree's unique beauty," according to the city's cherry blossom festival website.

In honor of its 175th anniversary, Ohio University received 175 trees from Chubu University (a sister location in Japan) in 1979. Chubu renewed the gift in 2004 for Ohio's bicentennial.

Cherry blossom ("sakura" in Japanese) festivals are now held every spring in these cities, as well as other locations in the United States. The trees stand as not only a symbol of friendship, but also as a glimmer of the fragility of spring.

"Sakura is a symbol of ... continuation of resilient life and the fragile and momentary aspect of natural beauty because sakura flowers do not stand well against harsh natural elements like rain and wind," stated a 2008 article published by Ohio University.