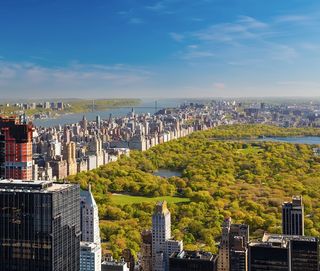 Avoid the concrete jungle: A new study finds that people who live in cities with more green space feel better than those surrounded by stone and steel.

In fact, the well-being boost associated with green space is equivalent to one-third the jump in well-being people get from being married and to one-tenth of the extra life satisfaction derived from being employed versus jobless, according to a study to be published in a forthcoming issue of the journal Psychological Science.

"These kinds of comparisons are important for policymakers when trying to decide how to invest scarce public resources, e.g. for park development or upkeep, and figuring out what 'bang' they'll get for their buck," study researcher Mathew White of the University of Exeter Medical School said in a statement. [7 Things That Will Make You Happy]

It's no surprise that nicer areas of town might be populated by happier people, but previous studies had never been able to tease out whether the emotionally well-off simply moved to greener spots or whether greenery really boosts well-being. White and his colleagues dug into the question by using long-term, national data collected between 1991 and 2008.

That way, the researchers could compare the life satisfaction of the same people as they moved from more to less verdant areas and vice versa. They also controlled for income, employment, marital status, health, housing time and local area factors, such as crime rates, to ensure as much as possible that the effects were coming from greenery.

The results showed that people's life satisfaction, as assessed by questionnaire, did improve when they moved to greener urban areas and decreased in urban spots where nature was out of site. Greener spaces were also linked with lower mental distress in residents.

The study can't prove conclusively that the green space caused the happiness boost, because it's impossible to control for every variable that might be at play, the researchers wrote. But experimental studies have also found that parks are linked with psychological health. In one study, researchers followed residents of public housing who were randomly assigned to apartments with views of trees and grass or with views of barren courtyards. The people living in view of greenery reported less domestic violence and fewer aggressive conflicts. They were also less likely to view their problems as unsolvable.

Another study, published in the journal Environmental Science & Technology in 2010, found that just a five-minute dose of nature could improve self-esteem. Green areas with water were deemed most beneficial.

Greenery may influence physical health as well as psychological. One 2002 study published in the Journal of Epidemiology & Community Health found that seniors in Japan had lower mortality rates in the five years of the study when they lived in areas surrounded by walkable green space.