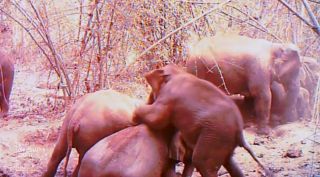 Joy to the elephants. Here is a video of wild elephants frolicking in a reserve in Cambodia that was once threatened by loggers, according to a release from the Wildlife Conservation Society (WCS).

In 2009, however, Cambodia transformed the area into a Yosemite-sized protected area known as the Seima Protection Forest, created to preserve animals and store carbon to fight climate change. It's now a "haven for 23 carnivore species, including seven cat species, two bears, and the Asian wild dog," according to the statement.

The footage was taken during biodiversity monitoring work undertaken by the WCS and the Cambodian Government's Forestry Administration.

"We released this footage on Earth Day to show that if we work together, conservationists, governments, and local communities can save elephants," said Joe Walston, with the WCS, in the statement. "These beautiful images in Seima Protection Forest are a visual testimony of what conservation success can look like."