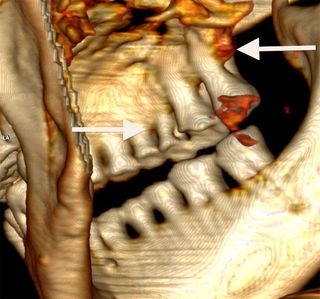 Otzi the iceman, an astonishingly preserved Neolithic mummy found in the Alps in 1991, shows evidence of severe gum disease and cavities (shown in red).
(Image: © UZH)

Ötzi the Iceman could have used a dentist. The amazingly preserved Neolithic mummy found in the Italian Alps had tooth decay, gum disease and dental trauma, new research suggests.

The new findings, published Tuesday (April 9) in the European Journal of Oral Sciences, suggest that the Iceman mummy's grain-heavy diet took a toll on his dental health.

"It's surprising how bad condition he is in," said study co-author Frank Ruhli, a paleopathologist at the University of Zurich in Switzerland. "We have the whole range of disease pathologies you can imagine." [Album: What Otzi the Iceman Looked Like]

Ötzi is probably the most-studied Neolithic man in history. More than 5,000 years ago, the ancient iceman was hit by an arrow and bled to death on a glacier in the Alps between modern-day Austria and Italy. The glacier preserved his body until it was discovered by hikers in 1991.

Since his discovery in the Ötzal Alps by the hikers, scientists have reconstructed Ötzi's face, analyzed his clothing, scrutinized his body and sequenced his genome.

These extensive studies revealed that Ötzi was a middle-age, well-to-do agriculturalist who lived not far from where he died. He also suffered from heart disease and joint pain, and probably had Lyme disease.

But somehow, scientists had never analyzed his teeth before. So Ruhli and his colleagues used a CT scanner to analyze the condition of Ötzi's teeth. They found that the ancient farmer had several cavities, likely caused by his carbohydrate-rich diet.

Ötzi also showed severe wear of his tooth enamel and severe gum disease. Hard minerals in milled grains abraded the surface of his teeth and gums, exposing the bone below and making the roots loose. Similar wear-and-tear is found in the teeth of Egyptian mummies who ate milled grains, Ruhli said.

"This is like a sandpaper acting on your teeth," Ruhli told LiveScience. "In another five to 10 years, he certainly would have lost some of his teeth."

As a result of his poor dental health, Ötzi would have felt pain when eating hot or tough foods, Ruhli said.

Ötzi also showed evidence of trauma to his front right incisor from being struck, either in a fight or an accident.

Ötzi's dental problems show the results of switching from a strict hunter-gatherer diet to an agricultural one, Ruhli said.

"Hunter-gatherers were depending on meat and berries, whereas [Ötzi] had processed food," Ruhli said. "The processing added a bigger variety of food but also impacted the quality of the teeth."