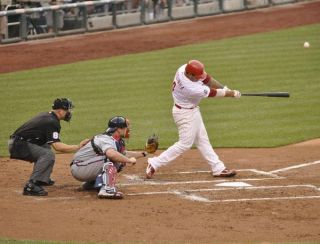 A wide face may be a boon on the baseball field, according to a new study of Japanese players that links facial width to the number of home runs hit.

Face shape and slugging prowess may seem like odd bedfellows, but previous research has linked facial width-to-height ratio to a number of personality traits, including aggression, achievement drive and tendency toward deception. One 2011 study published in the journal Psychological Science linked CEO face shape to a company's financial performance, with broader-faced CEOs heading up more successful firms.  Men with greater facial width-to-height ratios (meaning wider rather than narrower faces) have even been shown to have greater hand-grip strength.

Facial ratio "has been suggested to relate to levels of testosterone at puberty," said study researcher Hikaru Tsujimura, a research assistant at Goldsmiths, University of London. This "macho hormone" may contribute to a broader face shape while also increasing levels of aggression, strength and drive.

Previous research on facial ratio and personality had all been conducted with Caucasian men, however, Tsujimura told LiveScience. He and his colleagues decided to expand the research to Asian men using a sport with plenty of performance statistics to choose from — baseball.

The researchers measured facial width and height from photographs of Central League Pennant players, a Japanese league. They chose players who played in more than 10 games in the 2011 and 2012 seasons, resulting in 104 players from 2011 and 102 from 2012 (81 of those players overlapped from season to season).

The researchers then compared the players' facial width-to-height ratios with their batting averages, home runs, slugging percentage (total base count per at-bat), hits and runs batted in (at-bat opportunities that resulted in a run being scored, including by other players already on base).

Face of a champion

The calculations revealed that the wider a player's face relative to facial height, the more likely he was to be a stronger player overall. In the 2011 season, broader-faced players had more home runs, higher slugging percentages and more runs batted in. In 2012, broader-faced players again made more home runs, suggesting that this performance measure is especially linked to facial ratio. [Macho Man: 10 Wild Facts About His Body]

"We predicted the first two findings, but were surprised by the age link," Tsujimura said. "This requires further investigation."

The study, published today (April 9) in the journal Biology Letters, is the first evidence that facial ratio's link to personality and performance is not a Caucasian-only phenomenon, Tsujimura said. Facial width may also be linked to other sports, particularly games like tennis and golf in which grip strength is important, he said.