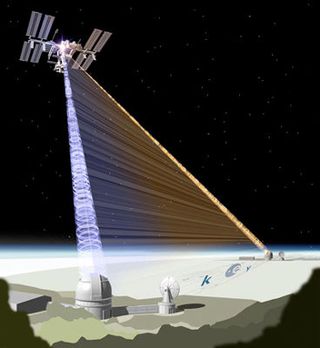 Here, an artist's conception shows the International Space Station in the midst of an experiment in quantum entanglement.
(Image: © ESA)

"Spooky" quantum entanglement connects two particles so that actions performed on one reflect on the other. Now, scientists propose testing entanglement over the greatest distance yet via an experiment on the International Space Station.

Until now, entanglement has been established on relatively small scales in labs on Earth. But now physicists propose sending half of an entangled particle pair to the space station, which orbits about 250 miles (400 kilometers) above the planet.

"According to quantum physics, entanglement is independent of distance," physicist Rupert Ursin of the Austrian Academy of Sciences said in a statement. "Our proposed Bell-type experiment will show that particles are entangled, over large distances — around 500 km — for the very first time in an experiment."

Ursin and his colleagues detail the proposed experiment today (April 9) in the Institute of Physics and German Physical Society's New Journal of Physics. [Wacky Physics: The Coolest Little Particles in Nature]

Tests of quantum entanglement are called Bell tests after the late Northern Irish physicist John Bell, who proposed real-world checks of quantum theories in the 1960s. Entanglement is one of the weirdest quantum predictions, positing that entangled particles, once separated, can somehow "communicate" with each other instantly. The notion unsettled Albert Einstein so much he famously called it "spooky action at a distance."

To better understand entanglement and test its limits, the researchers suggest flying a small device called a photon detection module to the International Space Station, where it could be attached to an existing motorized Nikon 400 mm camera lens, which observes the ground from the space station's panoramic Cupola window.

Once the module is installed, the scientists would entangle a pair of light particles, called photons, on the ground. One of these would then be sent from a ground station to the device on the orbiting lab, which would measure the particle and its properties, while the other would stay on Earth. If the particles keep their entangled state, a change to one would usher in an instant change to the other. Such a long-range test would allow the physicists to probe new questions about entanglement.

"Our experiments will also enable us to test potential effects gravity may have on quantum entanglement," Ursin said.

Plus, the project should be relatively quick to perform during just a few passes of the space station over the ground lab, with each experiment lasting just 70 seconds per pass, the researchers said.

"During a few months a year, the ISS passes five to six times in a row in the correct orientation for us to do our experiments," Ursin said."We envision setting up the experiment for a whole week and therefore having more than enough links to the ISS available."

The researchers also proposed a related experiment to try sending a secret key used for quantum information encryption over the farthest distance yet via the International Space Station. Until now, quantum encryption keys have been sent over only relatively short distances on Earth. If the key can be transferred via the researchers' proposed method, it could help to enable more practical quantum encryption.