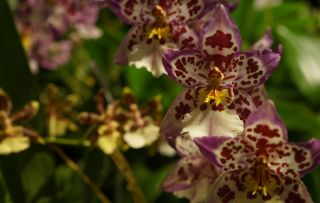 An orchid at the Smithsonian National Museum of Natural History "Orchids of Latin America" exhibit, known as a "Jungle Monarch."
(Image: © Miriam Kramer)

WASHINGTON — The orchid genus is old, widespread and diverse. They grow naturally all over the world and are a favorite plant among horticulturists.

A new exhibition here, at the Smithsonian's National Museum of Natural History, displays of the most popular and interesting species of orchids from Latin America.

Orchids aren't only prolific, they're unique, Tom Mirenda, an orchid expert and curator of the exhibition told OurAmazingPlanet when we visited. The exhibition is on view until April 26.

Here are five interesting facts you may not have known about one of the most popular flowers in the world:

1. There are more than 25,000 documented species of orchid, and scientists are finding more every day.

The family Orchidacea is home to more than 25,000 flower species, Mirenda said. Scientists suspect that there are more species in the topical areas of the world, and horticulturalists hybridize the flower to create new species that wouldn't occur in nature, and giving rise to some of the most popular varieties of the plant in existence. [Photos: Orchids of Latin America]

2. Orchids have a symmetry similar to human faces.

Much of the reason orchids are so widespread is thanks in part to humans' affinity for and desire to grow them. Mirenda thinks that the symmetry of the flower could have a lot to do with why people are so fond of orchids. An orchid has bilateral symmetry — like a human face — so if a line is drawn vertically down the middle of the flower, the two halves are mirror images of each other.

"When someone looks at an orchid, it looks back at you," said Mirenda.

3. Orchids are masters of deception.

Orchids deceive insects into pollinating them, Mirenda said. The reproductive parts of many orchid flowers are shaped and colored to look like the kind of insect they hope to attract. Once the insect is interested, the orchid's pollen sticks to the bug until it flies off to find another orchid that it mistakes for a mate.

4. Scientists found fossilized orchid pollen on the back of a bee.

Pollen from an ancient orchid was found on the back of a bee encased in amber, as detailed in a 2007 study in the journal Nature. The fossil was dated to around 10 million or 15 million years ago, but Mirenda suspects that the orchid family is far older. Some research even dates some species of orchid to around 120 million years ago, before the continents split into their current form.

Two species of orchids whose natural habitats are thousands of miles apart are actually closely related. Scientists think that the plants probably had a common ancestor before they were separated by continental drift, Mirenda said.

5. Vanilla is a species of orchid.

Perhaps one of the most popular species of orchids, the "flat leafed" vanilla plant is also one of the most widespread. Horticulturalists all over Latin America cultivate the plant for its flavorful charms, Mirenda said.