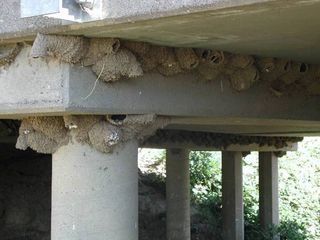 Some swallows may have lost the knack for kicking out freeloading cuckoo eggs since the birds moved in with humans, a new study finds.

Swallows followed humans out of Africa and around the world millions of years ago, evolving into several different species. Some now only live in buildings, while others still nest out in the open. A group of researchers set out to discover why indoor swallows and martins, a related swallow species, seem less bothered by parasites like cuckoos, which dump their identical-looking eggs in a swallow nest for the parents to raise, crowding out the host's chicks.

Cuckoos apparently avoid human habitation, preferring swallow nests in outdoor areas instead of nests in houses, barns and other human-built structures, the researchers report in the April issue of the journal Behavioral Ecology and Sociobiology. The scientists tested the consequences of this preference by placing fake and real cuckoo eggs in swallow and martin nests in indoor and outdoor settings in Europe and China. Because indoor swallows face less predation from cuckoos, they're worse at booting imposter eggs than their outdoor cousins, the study found.

The authors suggest that some swallows now build their nests close to humans to reduce their susceptibility to invading cuckoos, who prefer the outdoors. As swallows shifted indoors to avoid cuckoos, they lost their egg-spotting prowess, but evolved an effective defense against the moochers.

The swallows still know an invader on the wing — the researchers said swallows of every habitat defend themselves by mobbing and chasing cuckoos on sight.