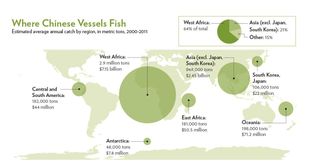 There's something fishy about Chinese ships plying foreign waters: They catch 12 times more fish than they report, according to a news release from the University of British Columbia, describing a study published recently in the journal Fish and Fisheries. That massive haul is worth a whopping $11.5 billion, and the amount was estimated by analyzing the quantity and type of fishing vessels used by the Chinese. The total weight of all the fish comes to 4.6 million tons (4.2 billion kilograms) per year, snatched from the seas of at least 90 countries, the release noted.

"China hasn't been forthcoming about its fisheries catches," said Dirk Zeller, a University of British Columbia researcher and study co-author, in the release. "While not reporting catches doesn't necessarily mean the fishing is illegal – there could be agreements between these countries and China that allow fishing – we simply don't know for sure as this information just isn't available."