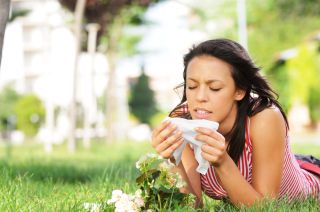 As the weather warms and plant pollination begins this spring, allergy sufferers are likely to feel worse than in past years. Unfortunately, a number of environmental factors are likely to keep the pattern of worsening allergies around in the coming years.

Experts say that an earlier arrival of spring and a longer growing season, along with increased precipitation and humidity from storms, will all potentially contribute to the increased presence and persistence of allergens.

"For the year 2020, it looks realistic to say pollen counts will increase by 20 percent," said Dr. Leonard Bielory, an allergy specialist with the Rutgers Center for Environmental Prediction and a physician at Robert Wood Johnson University Hospital in New Jersey. However, many variables could change that prediction, he said.

His own research indicates this year will be troublesome for those in the Northeast because of Sandy and other storms that have struck there.

"We found that the previous year's precipitation was a major impact on the following year's pollen production," Bielory said. "Sandy and snowstorms will increase the pollen production in the Northeast severalfold."

This season, the pollen count may rise dramatically and suddenly when the colder temperatures that have been seen so far finally abate, he said.

"The pollen is stored in waiting to release, and when it releases, it releases in a very abrupt way, climbing to a peak, Bielory said.

Therefore, the onset of allergy season is going to be stronger than last year, Bielory said.

Bielory is one of a number of researchers investigating the question of how climate change may affect allergens in the environment. And that research indicates spring is not the only season for allergy sufferers to worry about.

A 2011 study by the USDA and other researchers predicted that autumn will generally become warmer, which will lengthen the growing season for ragweed in the middle of the United States and Canada.

Beside the warm temperatures, the general increase in pollutants that is occurring can also make things worse for people with allergies — either by exacerbating health issues such as asthma, or because ozone and carbon dioxide may lead to increased pollen production and an increase in allergic material in the pollen grains.

"There are more pollen bullets and the bullets are bigger," said Dr. David Peden, a professor of pediatrics, medicine and microbiology/immunology at the University of North Carolina School of Medicine.

Outdoor allergens are not the only area of concern.

Storms such as Sandy, as with Katrina, can leave moisture lingering in homes, which can present indoor allergy problems.

"In a damp building, where there's likely more humidity in the air, that would promote more allergic response, because you'd have more house dust mites present," Peden said.

Mold and bacterial toxins may present a problem as well, because they can trigger an allergic response even in people who are generally not allergic to them.

"Until those [homes] get dried out, and unless those are appropriately remediated, one can anticipate there will be more allergy problems," Peden said.

The ultimate impact of climate change on allergy seasons is difficult to predict, but Peden said a number of steps can be taken to ease symptoms.

People with flexible schedules can try to be outside only later in the day, when pollen levels are lower. Also, patients might consider medications or possibly allergy shots after speaking with their allergist.

But people whose allergies are triggered at home may want to try a different tactic. Water vapor in the crawl space or leaky plumbing may have a big effect on a home's humidity. Simply having ducts checked for mold won't solve the problem, Peden said, but reducing humidity can be very useful.

While people might be inclined to buy a humidifier to relieve a dry throat, "if allergy is causing those breathing difficulties, the humidity will actually be a problem."