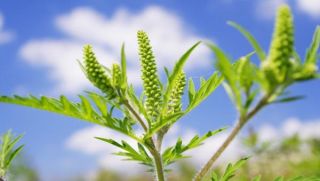 Plentiful rains coupled with warm temperatures this summer may lead to a particularly severe fall allergy season for those living in the Northeast, experts say.

Ragweed, which produces pollen from mid-August to mid-September, is a major contributor to allergies in the fall. Plenty of water and sunlight in summertime can be a boon for ragweed growth, and thus elevate pollen levels when the plant blooms in the fall, said Dr. Warren Filley, an allergist and clinical professor of medicine at the Oklahoma University Medical Center.

In addition, high moisture levels are ideal for growth of mold, another allergen.

"In places where they had plenty of moisture, you would expect them to see a good to severe [allergy] season, or a major season," Filley said.

However, in other parts of the country, including the Midwest and Southwest, the allergy season will probably be normal, Filley said. In these regions, there has been major drought.

"It's all relative to what's going on in your own microclimate," Filley said. "And with the United States being such a huge country, it's difficult to extrapolate all across the country."

Will allergy season be longer?

Ragweed blooms based on the length of daylight. So in the late summer and early fall months, the plant detects that it's time to spread its pollen, Filley said. But if a frost occurs, it can kill the plant, Filley said.

This year's fall allergy season may last longer than usual because over the last 15 years, the first frost of the year has been arriving several weeks later than usual, particularly in states further north and in Canada, he said.

"In recent years, there seems to be [a] longer season for ragweed," Filley said.

But other factors affect the growing season for ragweed. For instance, flooding can disrupt ragweed, because the plant likes to sprout up near river banks, Filley said. Parts of the Northeast saw a great deal of flooding following Hurricane Irene.

Across the Northeast region, the severity of fall allergies will vary. Dr. David J. Shulan, of Certified Allergy & Asthma Consultants in Albany, N.Y., said he hasn't noticed any change in ragweed pollen levels in his region in recent years. In fact, the ragweed season is just about drawing to a close there.

But, Shulan agreed that allergies from mold and dust mites, which love moist areas, could "certainly be worse," this year. He noted that this region has seen 18 to 19 more inches of rain than average this year.

Dust covers can be a useful for those with dust allergies, Shulan said. Air filters can also help with mold and pollen allergies, Rambasek said. Rambasek also recommended exercising in the morning, when pollen levels are lower.

Pass it on: Fall allergies may be particularly bad this year for those living in the Northeast.