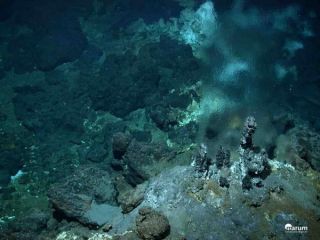 The animals and bacteria thrive on chemicals and live without sunlight, an ecosystem separate from life on land. When they were first discovered in the 1970s, scientists suggested the hydrothermal vent systems might be living fossils, untouched by surface events for hundreds of millions of years.

But genetic evidence suggests the modern versions of these strange life forms arose only after the last mass extinction on Earth, when a giant meteor impact killed the dinosaurs 65 million years ago. The first vent animals appeared 500 million years ago.

"We can't assume that these things are protected from what's happening at the surface of the planet," Bob Vrijenhoek, a biologist at the Monterey Bay Aquarium Research Institute, said in a statement. "They are every bit as susceptible as the surface organisms."

The findings were published online in the December 2012 issue of the journal Deep Sea Research Part II: Topical Studies in Oceanography.