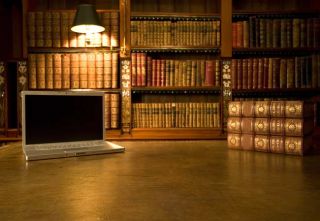 Print scientific journals are becoming less relevant in the Internet Age. Arxiv, a Web site where physicists post their research papers before they are published in print, has grown to contain more than 430,000 articles as of July 2007.
(Image: © Stock.Xchng)

Secrecy and competition to achieve breakthroughs have been part of scientific culture for centuries, but the latest Internet advances are forcing a tortured openness throughout the halls of science and raising questions about how research will be done in the future.

The openness at the technological and cultural heart of the Internet is fast becoming an irreplaceable tool for many scientists, especially biologists, chemists and physicists — allowing them to forgo the long wait to publish in a print journal and instead to blog about early findings and even post their data and lab notes online. The result: Science is moving way faster and more people are part of the dialogue.

But no one agrees yet on whether this extreme sharing among scientists and even the public is ultimately good for science or undermining it.

"It scares people," says biochemist Cameron Neylon, an open science advocate who works at Rutherford Appleton Laboratory in England and posts all his experiments in an online "open notebook." "People are very frightened about being that open," Neylon told LiveScience. "This is not really the way current academic culture is built and we are trying to change it. So that makes some people uncomfortable." Open science The open science approach forces researchers to grapple with the question of whether they can still get sufficient credit for their ideas, said physicist Sabine Hossenfelder, co-organizer of a conference on the topic set to begin Sept. 8 at the Perimeter Institute in Ontario, Canada.

"In some areas, credit is mainly appreciation by peers (think mathematics and theoretical physics)," she said. "In other areas, money is a factor. That might be through patents or simply because some ideas can be used to make money directly. Consider if you would have a great model to predict the quirks of the world's economy — would you go and publish it?"

Open science is a shorthand for technological tools, many of which are Web-based, that help scientists communicate about their findings. At its most radical, the ethos could be described as "no insider information." Information available to researchers, as far as possible, is made available to absolutely everyone.

Beyond email, teleconferencing and search engines, there are many examples: blogs where scientists can correspond casually about their work long before it is published in a journal; social networks that are scientist friendly such as Laboratree and Ologeez; GoogleDocs and wikis which make it easy for people to collaborate via the Web on single documents; a site called Connotea that allows scientists to share bookmarks for research papers; sites like Arxiv, where physicists post their "pre-print" research papers before they are published in a print journal; OpenWetWare which allows scientists to post and share new innovations in lab techniques; the Journal of Visualized Experiments, an open-access site where you can see videos of how research teams do their work; GenBank, an online searchable database for DNA sequences; Science Commons, a non-profit project at MIT to make research more efficient via the Web, such as enabling easy online ordering of lab materials referenced in journal articles; virtual conferences; online open-access (and free) journals like Public Library of Science (PLoS); and open-source software that can often be downloaded free off Web sites.

The upshot: Science is no longer under lock and key, trickling out as it used to at the discretion of laconic professors and tense PR offices. For some scientists, secrets no longer serve them. But not everyone agrees.

Networked cyborgs Just a few decades ago, as a scientist, here is how you did your work: You toiled in obscurity and relative solitude.

It could take years to generate results, and scientists tended to guard their data and findings prior to publication in a journal, possibly giving out only minimal details on what exactly they were researching.

Results became legitimate and credit was given to scientists once their results were published as a paper in a "peer-reviewed" journal — one for which the work is evaluated by experts in the field as acceptable or unacceptable for print. Often papers were sent back for rewrites or clarification, and publication can occur months after submission. This system still is in place for many scientists.

Fear of losing peer review Another drawback of open science can be that results go public before they should. In science, experimental results are frequently proven wrong by subsequent work. Yet even peer review cannot ensure against this, nor can it prevent outright fraud, as proven by a 2005 case involving a South Korean scientist who claimed to have achieved the first cloning of a human embryo. A later examination of his work showed he had fabricated his results. "Like in the case of scientific fraud, if you talk to people in biomedicine, they are really concerned about peer review because it is one of the few ways they have to stop fraud. In fact most fraud cases come from biomedicine," said Harvard University historian of science Mario Biagioli. Peer review started in the 17th century as a variation of the censorship practices attached to books and newssheets publishing, Biagioli has written. Nowadays, many fields of science and communicators of it (including journalists) rely on peer review as a generic stamp of approval. "The social system of science has become so complicated, unregulated and dispersed in terms of geography and disciplines, so peer review has been elevated to a principle that unifies a fragmented field," Biagioli said. Trends in the strength of peer review tend to zig and zag throughout history, and even today, says MIT's Kaiser, who also is an historian of science. The premier physics journal Physical Review only started requiring peer review for every submission in the late 1950s, he said. And today, Arxiv, one of the most frequently cited examples of open science, has no peer review for individual papers, but it has begun to add in some constraints on allowable authors. The site used to allow anyone with email addresses associated with academic institutions to post their papers. Now, authors of research papers who post in Arxiv are vetted before they can post for the first time. In some ways, things are tightening up when it comes to openness in physics, Kaiser said. In any case, the function of print journals, in physics at least, is changing. "Ease of sharing everything prior to peer review is flourishing, and in my opinion very few physicists are reading journals for information these days," Kaiser said. "Journals have largely lost their information function." Now they are used for promotions and prestige in physics — for helping to build careers but not necessarily for getting ideas into circulation. "Now we can give away most of our physics results for free," Kaiser said. "No one is going to care if I post some obscure model of cosmology on this Web site." But that is just physics. In biomedicine today, he said, the terrain is totally different, primarily because of complex intellectual property considerations and potential conflicts of interest among researchers funded by drug companies, as well as concerns over patient safety and privacy. For the good of truth, humanity, economies? Another argument in favor of open science is sort of a big picture issue for humanity, scientific truth and economies, Neylon said. "Making things more open leads to more innovation and more economic activity, and so the technology that underlies the Web makes it possible to share in a way that was never really possible before, while at same time it also means that kinds of models and results generated are much more rich," he said. This is the open source approach to software development, as opposed to commercial closed source approaches, Neylon said. The internals are protected by developers and lawyers, but the platform is available for the public to build on in very creative ways. "Science was always about mashing up, taking one result and applying it to your [work] in a different way," Neylon said. "The question is 'Can we make that as effective as samples data and analysis as it does for a map and set of addresses for a coffee shop?' That is the vision."