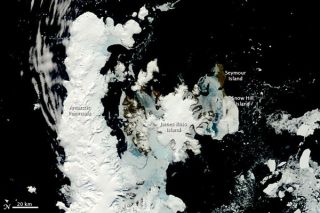 More ice is melting for a longer period of time each year on the Antarctic Peninsula, new research shows.

The area is warming more quickly than almost any other spot on Earth. Temperatures on this mountainous strip of land have risen by 5.4 degrees Fahrenheit (3 degrees Celsius) since the 1950s, according to a news release from the British Antarctic Survey, whose scientists were involved in the research.

The study, published today (March 27) in the Journal of Geophysical Research: Earth Surface, analyzed data from 30 weather stations on the Antarctic Peninsula and found that not only is the temperature rising, but it's staying warmer longer, and all that warming is having an impact on the ice.

"We found a significant increase in the length of the melting season at most of the stations with the longest temperature records," said study author Nick Barrand, in a statement. "At one station, the average length of the melt season almost doubled between 1948 and 2011."

The researchers calculated that the meltwater from this thawing ice is helping to break up ice shelves connected to the peninsula, which in turn speeds up the flow of glaciers to the sea. Glaciers are essentially rivers of ice, and ice shelves are the part of a glacier that floats on the ocean water, acting as sort of a doorstop. As the flow of the glaciers speeds up, faster melting occurs and could add to global sea level rise, according to a computer model the researchers created.

"We found that the model was very good at reproducing the pattern and timing of the melt, and changes in melting between years," Barrand said. "This increases confidence in the use of climate models to predict future changes to snow and ice cover in the Antarctic Peninsula."