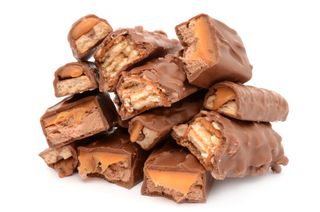 A vast array of junk food, from candy bars to soft drinks, can be purchased with SNAP benefits.
(Image: © n7atal7i / Shutterstock.com)

And with about 47 million people enrolled in SNAP, it's the government's largest food assistance program.

But in reality, SNAP benefits (often referred to as food stamps) are used to purchase hundreds of grocery store items that have virtually no nutritional value.

Unlike alcohol and cigarettes, junk food is not on the brief list of items that can't be bought using a SNAP card.

"In short, this immense nutrition program pays for a lot of stuff that is the opposite of nutritious," said columnist Charles Lane in the Washington Post.

Even the administrators of SNAP — a federal program with a $78 billion budget, according to the Congressional Budget Office — acknowledge the apparent contradiction between the program's mission and its implementation.

On the SNAP program's website, a page titled "Why can people buy junk food with their SNAP benefits?" explains how an eligible food is defined as "any food or food product for home consumption." Because no food is excluded, "Any change to this definition would require a new law."

The SNAP program stands in stark contrast to the Women, Infants and Children (WIC) food program, which places strict limits on food purchases. In some states, even white rice and bagels are disallowed for WIC purchases.

But the SNAP program allows recipients to purchase these and other junk food items:

"At the very least, SNAP should bar sodas, a nutritionally empty 'food' if ever there were one," said Lane in the Post. But under current guidelines, any kind of soda of any size can be purchased with a SNAP card — even Mountain Dew, which has 170 calories in a single 12-ounce can.

Bakery items, including cakes for birthdays or other special occasions, are eligible SNAP purchases "as long as the value of non-edible decorations does not exceed 50 percent of the purchase price of the cake," according to the program's website.

Any kind of cookie — Double Stuf Oreo, Chips Ahoy, Famous Amos, Nutter Butter, Lorna Doone — can be purchased with SNAP benefits. A serving of just two Double Stuf Oreos, by the way, has 140 calories, and 63 of those calories come from fat.

Who doesn't love ice cream? Certainly not the SNAP program, which lets beneficiaries buy treats like Breyers Cookies and Cream ice cream, with 15 grams of sugars and 40 calories from fat in a little half-cup (64 gram) serving.

Just one Snickers Egg — a popular Easter treat — contains 5 grams of saturated fat and 160 calories from fat. And a Kit Kat Milk Chocolate Wafer Bar is even worse, with 11 grams of fat. But you can buy them and other candies with a SNAP card.

To get just 1 gram of dietary fiber, you'd have to eat 27 Cheez-It snack crackers, but that serving also includes 150 total calories and 8 grams of fat. All of that fat, sodium (250 mg) and carbohydrates (17 grams) can be yours under the SNAP program.

A storm is currently brewing over energy drinks such as Monster, Red Bull and Rockstar. They have recently come under increased scrutiny because of their high caffeine content and their possible link to deaths and injuries among teenagers.

But the energy drink industry is fighting back, and one strategy is to label their products as "beverages" instead of "supplements," because all beverages are eligible for SNAP purchases, the New York Times reports.

Some states — which administer the SNAP program for their residents — have made efforts to limit the types of grocery items eligible under the program. Two bills are now making their way through the Texas legislature that would make junk food and energy drinks ineligible for SNAP purchases, according to the Daily Caller.

And, not surprisingly, both bills are vehemently protested against by the Texas Beverage Association, which "opposes all efforts to restrict choice for any consumers — including those who receive SNAP assistance," according to their website.

Correction: This article was updated March 21, 2013, to reflect the calories in a serving of Mountain Dew soft drink: 170, not 696 as previously stated.