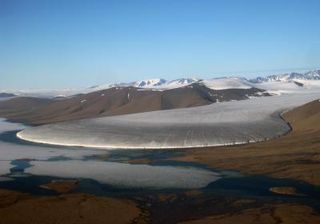 The Elephant Foot Glacier in northeast Greenland, one of the island's thousands of peripheral glaciers.
(Image: © Dirk van AS (GEUS))

Melting from stand-alone glaciers in Greenland accounts for a whopping 10 percent of the total sea level rise worldwide from melting ice, which is more than expected, a new study finds.

These "peripheral" glaciers are isolated from the main ice sheet, flowing independently to the sea, and make up just 5 to 7 percent of Greenland's total ice coverage, researchers found. But they are rapidly losing ice, making up 20 percent of the island's total contribution to sea level rise. Because the glaciers cover a smaller area than the ice sheets, they are losing ice about 2.5 times faster than the giant ice sheet, the researchers calculated.

"The ice loss with respect to area is significantly higher than of the ice sheet," lead study author Tobias Bolch of the University of Zurich in Switzerland said in a statement. "This means that the local glaciers react faster with respect to climate change. This information will help to improve the predictions of the future contribution of Greenland's ice to sea-level rise."

Bolch and his colleagues estimated the changing mass of the glaciers using lasers that measure the height of the ice from space and a recently completed inventory of Greenland's glaciers and ice caps. The study appeared in the March 13 issue of the journal Geophysical Research Letters.

About 12 cubic miles (50 Gigatons) of water poured into the ocean from the isolated glaciers each year between 2003 and 2008, the study found.

"Beside the large ice sheet, there are thousands of peripheral glaciers which are not connected to the ice sheet or can be separated from it due to the existence of ice divides," Bolch said. "The area of those glaciers is about 50 times higher than the ice cover of the European Alps. Consequently, it is important to investigate not only the ice sheet, but also these local glaciers."