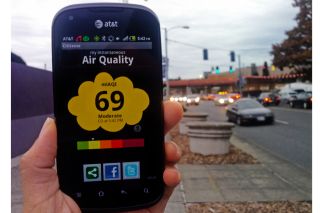 Computer scientists at the University of California, San Diego have built a small fleet of portable pollution sensors with which users can monitor air quality in real time — on their smart phones.

The sensors which are called CitiSense, may be particularly useful to people who suffer from chronic conditions, such as asthma, and must avoid exposure to pollutants.

Data from the sensors may be used to estimate air quality throughout the area where the devices are deployed — not just within a localized space.The goal is a wireless network in which hundreds or thousands of small environmental sensors carried by the public rely on cell phones to shuttle information to central computers where it will be analyzed, anonymized and shared with individuals, public health agencies and cities at large.

Just 100 of the sensors deployed in a fairly large area could generate a wealth of data — well beyond what a small number of EPA-mandated air-quality monitoring stations can provide. For example, San Diego County has 3.1 million residents, 4,000 square miles — and only about 10 stations.

"We want to get more data and better data, which we can provide to the public,"said William Griswold, a computer science professor at the Jacobs School of Engineering at UC San Diego and the lead investigator on the project. "We are making the invisible visible."

The CitiSense sensors detect ozone, nitrogen dioxide and carbon monoxide, the most common pollutants emitted by cars and trucks. The user interface displays the sensor's readings on a smart phone by using a color-coded scale for air quality based on the EPA's air quality ratings, from green (good) to purple (hazardous).

Researchers provided the sensors for four weeks to 30 users, including commuters at UC San Diego and faculty, students and staff members in the computer science department at the Jacobs School of Engineering. Computer scientists presented findings from these field tests at the Wireless Health 2012 conference in San Diego earlier this year.