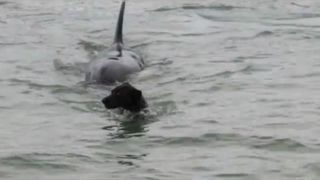 The Internet is a friendly place for cute and weird animal behaviors caught on camera, from foxes jumping on trampolines to dogs playing with deer. But beyond entertaining the masses, these amateur viral videos sometimes document behaviors that are rarely seen, and they could help scientists understand how species interact with each other, some researchers say.

"They're not substitutes for good, hardcore research, but they're very valuable for people who aren't going to see certain things," Marc Bekoff, a former professor of ecology and evolutionary biology at the University of Colorado, Boulder, told LiveScience this week. "From a pedagogical point of view, I wish I had had more access to YouTube videos. I would have probably used them in my classes."

Take the famous "snowboarding" crow that was caught repeatedly sliding down an icy roof using a plastic lid. A Russian video of the playful behavior was uploaded to YouTube in January 2012. In its first six months online, it had been viewed more than 670,000 times.

Ximena Nelson, a biologist at the University of Canterbury in New Zealand, said she had witnessed similar sledding behavior in the kea parrot, but noted that it's very rare to see. Nelson said in an email that "citizen science can give us a much better idea of the variety of interesting play behaviors, tool use, or other behavior that is relatively rare that can be found among other animals."

Nelson and her colleague Natasha Fijn, of the Australian National University, argue in a recent article in Animal Behavior that these clips could provide evidence and valuable insights on uncommon or even unknown animal antics.

Some scientists are already putting such resources to use. A study published recently in the journal Wildlife Research surveyed photos and videos of whale sharks that vacationers have uploaded to social media sites like Flickr and YouTube. The study found that scientists could use 85 percent of these images to successfully identify individual sharks, which could help scientists track and learn more about the huge animals.

Footage uploaded by citizens could be especially helpful in deepening our understanding animal play, which is understudied, sometimes difficult to observe, and a favorite subgenre of viral animal videos, the researchers say.

"Some of the videos have opened the door for thinking about cross-species relationships," Bekoff said. Dogs tend to be featured heavily in these kinds of clips, and they could challenge the notion of "man's best friend" as they show canines spontaneously playing with a remarkable range of animals, including monkeys, dolphins, deer, sheep, killer whales, horses and alpacas.

"One could conclude that dogs are not particularly anthropocentric or even canine-centric in relation to play bouts: they appear to play with any species that are willing to reciprocate," Nelson and Fijn write.

But not all animal videos are created equal. Nelson and Fijn say scientists need to be wary of clips that have been altered in post-production editing, which, they say, might be a reason why footage from tightly edited wildlife films has not been used in academic studies of animal behavior.