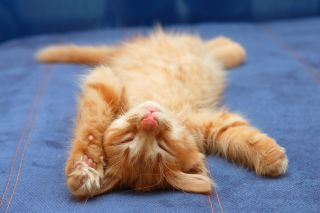 Kitten sleeping on its back.
(Image: © vita khorzhevska | Shutterstock)

Here's a defense for when your boss catches you watching kitten videos on the job: New research shows looking at cute images of baby animals may actually improve your work performance, inspiring more fine-tuned attention and careful behavior.

Perhaps unsurprisingly this new study comes from researchers in Japan, where kawaii (Japanese for "cute") reigns. From the characters of "Hello Kitty" and "Pokémon's" Pikachu, cute creatures stir positive feelings, researchers say, because they resemble babies with their big eyes and large heads.

Seeing baby faces is known to trigger care-giving impulses in humans, and some research has even suggested cute images may encourage friendliness. In the new study out of Hiroshima University, published online this week in the journal PLoS ONE, researchers show that these impulses can transfer outside of baby care and social situations to tasks that require narrow focus and concentration.

In the first part of the experiment, 48 college students were asked to complete a game not unlike Milton Bradley's "Operation." Using tweezers, they had to pluck out 14 tiny pieces from holes in the body of a "patient." After one round of the game, half of the students looked at seven images of baby animals (considered the cute images) while the others viewed pictures of adult animals.

Then the participants tried their hand at the operation task again. The students who had just looked at the baby animal pictures were able to pluck out more of the game pieces than they had before, while the others hardly improved their performance. [Photos: World's Cutest Baby Animals]

Previous studies have shown that humans slow down their speech when talking to babies, and the Japanese researchers speculated that viewing the cute images may have had a similar effect — slowing the behavior of the students who saw the cute baby animal images and improving their accuracy in the game. In addition, the researchers suspect the baby-animal group got a boost in nurturing feelings, something that would likely benefit performance in the care-related task that involved helping someone (even if that someone was an anthropomorphic game board).

To challenge these possible explanations, the researchers set up the same experiment with 48 new participants and some slight changes. Instead of the operation task, the students looked at clusters of numbers from which they had to figure out how many times a certain digit appeared. They were told to provide as many accurate answers as possible within three minutes, adding an element of time pressure. And this time, the researchers divided the students into three groups -- two groups looked at either the baby or adult animal pictures as before, while the third group looked at mouth-watering pictures of sushi, steak and other food.

The findings from the first experiment held true. The students who looked at the baby animal pictures did much better on the number matrix task the second time around, while the others did not significantly improve. The key to good performance in this task was narrowing focus to zoom in on the designated number, the researchers said. And indeed, in another experiment, the researchers found the cute-picture-viewing participants were better at honing in on local features than identifying big-picture elements of visual stimuli.

"Kawaii things not only make us happier, but also affect our behavior," wrote the researchers, led by cognitive psychologist Hiroshi Nittono. "This study shows that viewing cute things improves subsequent performance in tasks that require behavioral carefulness, possibly by narrowing the breadth of attentional focus."

They said these effects could benefit drivers and office workers — as if you needed another reason to keep that pandacam tab open on your browser.