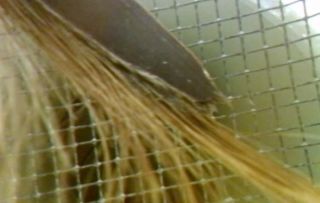 Humpback and bowhead whales create their own food nets from specialized bristles in their mouths to more efficiently nab fishy morsels, a new study of baleen whales suggests.

When these whales feed, some open their jaws wide to gulp mouthfuls of seawater, whereas others swim with half-open mouths (called ramming or skim-feeding). Both rely on baleen, a system of hairy bristles that line their mouths and trap food. The new study, published today (March 13) in The Journal of Experimental Biology, shows that the baleen of bowhead whales and humpback whales is not the passive structure it was thought to be, but forms a tangled mesh in water that streams through it as the animals swim.

And how the baleen gets morphed is different depending on the specific whale's feeding style, the study found.

"Everyone assumed baleen works like a sieve," study author Alexander Werth, a biologist at Hampden-Sydney College, Va., told LiveScience. But as soon as he put pieces of baleen in a flow tank, "it became immediately apparent that it was a dynamic tissue rather than a static one."

Baleen is made up of keratin, the protein found in hair and fingernails, which forms large plates that enclose a fibrous inner core. Whales typically have about 300 plate structures on either side of their mouths, perpendicular to the direction that water flows. The whales' tongues wear away the inner edges of the plates to create a fringe that traps krill and other tasty morsels.

Werth wanted to compare the biomechanics of the bowhead whale (Balaena mysticetus) with that of the humpback whale (Megaptera novaeangliae). He placed pieces of baleen from these whales in a giant tank, and pumped water and small latex beads (stand-ins for the food morsels they filter from water) through them, observing this with an underwater camera. [See Video of Baleen in Motion]

Werth tested small sections of each kind of baleen at water speeds between 2 and 55 inches per second (5 and 140 centimeters per second), which is comparable to whale swimming speeds. Werth also varied the angle of the baleen between parallel and perpendicular to the flow. He observed how many beads the baleen bristles trapped for at least 2 seconds.

The single baleen plates trapped the most beads at the lowest water speeds, the results showed. As the water speed increased, the bristles streamed out — like hair blowing in a strong wind — creating gaps where particles could slip through.

But baleen isn't found in single plates in a whale's mouth, it's found in rows, so Werth tested a small rack of six baleen plates. Now the bristles formed a tangled net in the flowing water, with most beads being trapped at about 28 to 31 inches/s (70 to 80 cm/s) — exactly the speed bowhead whales swim when they're "ram" feeding.

"The first thing I saw was the size of that net depends on how fast the waters are flowing through it and in what direction," Werth said. "The fringes from adjacent plates would tangle up and make a really dense knot."

The findings reveal how the baleen of bowhead whales and humpbacks differs biomechanically. Those differences explain the specialized feeding styles of the two types of whales: Bowheads feed by continuous ram feeding at slower speeds, whereas humpbacks feed in intermittent gulps at higher speeds.

The baleen of humpback whales performed best at the same speed as that of bowheads, despite the fact that humpbacks typically swim faster than bowheads when feeding.

"This is a fascinating study," marine ecologist Ari Friedlaender of Duke University, who was not involved in the study, told LiveScience in an email, adding he was surprised  that the bowhead whale baleen functioned better at higher flow speeds than the humpback whale baleen.

"We think of [bowhead] whales generally as slow-feeding animals that are basically mowing the lawn and that humpback whales are more energetic and feed faster," Friedlaender said, but it appears humpbacks may actually be moving at a similar speed while feeding.

Werth also hopes to explore how pollutants affect the whales' baleen. "I'm really worried about what would happen if the filter gets clogged with oil or debris," he said.