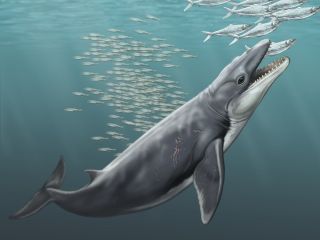 The ancient baleen whale J. hunderi would have fed by sucking in single fish with its large mouth.
(Image: © Carl Buell)

This whale's toothy smile is unlike any other in its group. A newly discovered fossil of one of the oldest baleen whales provides the missing link in the evolution of the giant blue whale's gaping maw.

By examining the jaws of one of the earliest baleen whales, researchers discovered that the huge elastic jaws of blue whales developed from a more rigid form. (Baleen whales are scientifically known as mysticetes, or "mustached whales," in comparison to the odontocetes, or "toothed whales," such as dolphins and killer whales.)

Fitzgerald is referring to the whales' filter-feeding: When the whales lower their jaws to extreme angles, a stretchy tissue attached to the jaw expands, allowing them to collect large volumes of water while swimming. Baleen plates that grow from their upper jaws act like a kind of sieve to filter out small shrimplike prey called krill, their main source of food.

The newly discovered remains belonged to Janjucetus hunderi, which lived about 25 million years ago off the coast of Australia and was probably about 10 feet (3 meters) long, about the size of an average dolphin. It had large teeth for gripping and shredding prey, very different from the hairlike teeth of today's baleen whales. And it is one of the first fossilized baleen jaws that do not have the elastic quality of living baleens.

"Janjucetus and the earliest mysticetes did not have the loose lower jaws that allows their living cousins to increase their mouth size and engulf huge volumes of seawater when filter-feeding on plankton such as krill and small fish," Fitzgerald said. "Janjucetus is a baleen whale, but not as we know them."

Other large-mouth adaptations currently used by baleen whales, like a wide upper jaw, are present in the J. hunderi fossil, which means their large mouths developed before filter-feeding did. They most likely fed on single, large prey, and used their large mouths to suck in unwitting fish and squid.

The study was published today (Aug. 16) in the journal Biology Letters.