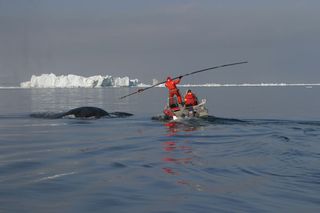 Scientists tag a bowhead whale. Data from satellite transmitter tags revealed that bowhead whales venture into the Northwest Passage. In 2010, a year with particular low sea ice coverage in the Arctic passage, two whales from opposite sides of the Arctic crossed paths, indicating their populations do sometimes mix.
(Image: © M.P. Heide-Jørgensen)

For the first time, scientists have documented bowhead whales traveling from opposite sides of the Canadian High Arctic and mingling in the Northwest Passage, a usually ice-clogged route connecting the Atlantic and Pacific Oceans.

There have been other hints that geographically separate populations of these air-breathing mammals traversed the Arctic when the ice cover shrinks, including signs of genetic mixing between populations and 19th-century reports of harpoon heads of Atlantic origin showing up in whales on the western side of the Arctic.

The new satellite-tracking data follows the whales' travels and confirms that they can indeed mingle in the Northwest Passage, according to researchers led by Mads Peter Heide-Jørgensen with the Greenland Institute of Natural Resources. [Top 10 Most Incredible Animal Journeys]

The rapid loss of Arctic sea ice in recent years — earlier this month ice reached record lows and has declined dramatically since continuous measurements began in 1979 — has probably made this intermingling easier, the researchers write in a study published online in the journal Biology Letters on Sept. 21.

"Given recent rates of sea ice loss, climate change may eliminate geographical divisions between stocks of bowhead whales and open new areas that have not been inhabited by bowhead whales for millennia," they write.

Between 2001 and 2010, the scientists put satellite-transmitter tags on whales from two populations living on either side of the Canadian Arctic — those in the Bering-Chukchi-Beaufort Sea area, on the Alaskan side and those on the Greenland side, the Baffin Bay-Davis Strait population.

In 2002 and then in 2006, in late summer and early fall, when sea ice extent is low due to melting, the scientists recorded single whales making forays partially into the Northwest Passage. However, both years, the passage remained blocked by ice limiting the whales' journeys. Then, in 2010, the scientists tracked two male whales, one traveling from the Alaska side, one from the Greenland side, as they swam into the Northwest Passage, which had become largely ice-free as of Aug. 10, 2010. The tags showed both of them at a midpoint, the Viscount Melville Sound in mid-September, within 81 miles (130 kilometers) of one another.

It is not known what attracted the whales to this area, given the region produces little food compared with other bowhead-whale feeding areas, they write.

Norwegian explorer Roald Amundsen first navigated the Northwest Passage in 1903 to 1906 with great difficulty. In 2007, a year of unprecedented melting in the Arctic, the passage offered clear sailing. As global warming continues ice all over the Arctic is expected to continue receding, eventually bringing ice-free summers.

Melting Arctic sea ice appears to have allowed other organisms traverse the top of the planet in recent years, including a single-celled alga that has reappeared in the North Atlantic after floating over from the Pacific after an 800,000-year absence, and the arrival of a gray whale, a species believed to be confined to the Pacific, in the Mediterranean Sea.