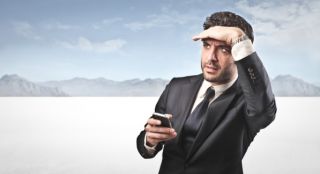 Despite our best efforts, it can be surprisingly easy for humans to get lost
(Image: © ollyy | Shutterstock.com)

In 1996, a ranger flying a helicopter over Death Valley, Calif., spotted a minivan in a wash near Anvil Canyon. That was ominous for several reasons: There was no road leading up to the spot, and the area wasn't passable without a four-wheel vehicle.

After investigating the vehicle, park rangers determined that four German tourists — a man, a woman, and their two sons, ages 4 and 11 — had last rented the minivan. But there was no trace of the family itself.

Their remains were not found for about 15 years, until Tom Mahood, a physicist-turned-adventurer, retraced their steps. As he recounts on his website, a series of reasonable mistakes, such as misreading the steepness of a canyon descent and being led astray by culturally confusing map landmarks, likely led to the decisions that ended in them separating, then dying in the scorching desert heat.

The story reveals how easy it is for people to become hopelessly lost in the wilderness. Humans get lost in part because we don't pay attention and have lost ancient ways of reading the environment to navigate. But humans' way-finding abilities are also less precise than the abilities of other animals.

While innate navigational ability differs, "just about everyone can get better," said Daniel Montello, a geographer and psychologist at the University of California Santa Barbara.

Historically, not getting lost was a matter of life or death. One wrong turn could lead to a hyena's den or a nasty death from thirst. As a result, all indigenous cultures navigate in part by tracking the sun or the stars' positions in the sky relative to the fixed star Polaris, said Tristan Gooley, author of "The Natural Navigator" (The Experiment, 2012) and owner of naturalnavigator.com.

Those cues "are as good if not better than a compass in many situations," Gooley told LiveScience.

For instance, Polynesian seafarers track direction using ocean swells, the natural rise and fall of the water caused when a huge storm generates waves deep at sea. Because swells can linger for days, they can reliably be used to fine-tune direction, Gooley said. The Polynesians can track up to eight swells at a time, he said. [The 9 Craziest Ocean Voyages]

Both land and sea bear traces of long- and short-term directional cues. For instance, grass may wave in the direction of the winds on a given day, but a tree may lean toward the direction the winds blow over long periods of time, Gooley said.

Use it or lose it

Human mental-mapping stems in part from a brain region called the hippocampus, and studies suggest it can be strengthened with practice. For instance, one study found cab drivers in London have bigger and thicker hippocampi than the average person, said Colin Ellard, a psychologist at the University of Waterloo in Canada and author of the book "You Are Here" (Doubleday, 2009).

But the sense of direction may also wither with disuse. Small studies have found that using a GPS for just a few hours seems to impair people's navigational skills in the short term, Montello said. Many people get lost because they simply aren't paying attention, he added.

In addition, humans have faulty internal senses of direction. For instance, several studies have found that people walk in circles when blindfolded or disoriented (for instance, in an unfamiliar, heavily forested area), Ellard said. African desert ants, by contrast, can march in a straight line for miles. [Album: Stunning Photos of the World's Ants]

"They have this prodigious ability to keep track of where they are with respect to their initial starting point," Ellard told LiveScience. "They have a very accurate internal odometer."

But while animals' sense of direction is more precise, we have a much more flexible way-finding ability, Montello said. For instance, migrating animals travel thousands of miles but usually go to specific, pre-determined locations. But humans use landmarks, directional cues, a sense of how far they've traveled, as well as myriad other cues to go vastly more places, often with no prior knowledge.

"We travel much wider and farther than a lot of other animals," Montello said.

Tricks of the trade

A few simple techniques can help avoid getting lost.

"A common way that people get lost, is the environment looks different in a different direction," Montello said.

So when forging ahead on a long trek, it's helpful to look back and take a mental photograph to visualize the area from multiple orientations, Montello said.

Paying attention to visual landmarks and using dead reckoning — tracking of their speed and orientation, are also useful, he said.