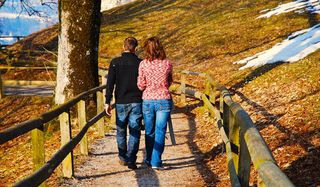 People who walk regularly and briskly after suffering a stroke will not only improve their physical fitness, but also their mobility and quality of life, according to a new study.

Researchers at the University of the West Indies in Jamaica had one group of stroke survivors follow a supervised program of brisk outdoor walking for three months. A second group, which did not do supervised exercise, received therapeutic massages.

The walkers started out by following a designated route for 15 minutes, lengthening the duration of their walk by five minutes a week until they walked for 30 straight minutes. As people became more fit, they gradually increased their pace, reaching 60 to 85 percent of their target heart rate. People in the massage group received light massage on their affected side for 25 minutes three times a week.

All of the 128 participants, who ranged in age from 42 to 90, had suffered either an ischemic or hemorrhagic stroke six to 24 months prior to the start of the study.  (An ischemic stroke occurs when a clot blocks the blood supply to part of the brain. A hemorrhagic stroke occurs when a blood vessel in or around the brain weakens and bursts.) Everyone was able to walk on his or her own with or without a cane.

At the study's end, the researchers found that the people in the walking group walked 17.6 percent farther in a six-minute endurance test than did people in the massage group and had a resting heart rate that was 1.5 percent lower. What's more, the walkers had nearly a 17 percent improvement in their quality of life, based on physical health, compared with the massage recipients.

According to the Centers for Disease Control and Prevention (CDC), more than 795,000 Americans suffer a stroke each year. An estimated 610,000 of these cases are first or new strokes. One in four are repeat strokes.

After suffering a stroke, many people have problems with balance and coordination and are afraid that they'll fall. As a result, they may avoid doing everyday activities. Earlier research has found that becoming more physically active without overly stressing the body can improve the quality of life for stroke survivors. However, those studies examined the benefits of treadmill walking and cycling.

This new study shows that moderately impaired stroke survivors can achieve similar results without the need for exercise equipment. Indeed, the walking regimen used in the current study "may be just as effective as treadmill walking," the researchers wrote.

"Walking is a great way to get active after a stroke," lead study author Carron Gordon, Ph.D., said in a statement. "It's familiar, inexpensive and it's something people could very easily get into."

The study is published today (March 7) in the journal Stroke.

Pass it on: Regular, brisk walking improves quality of life for people who have suffered a stroke.