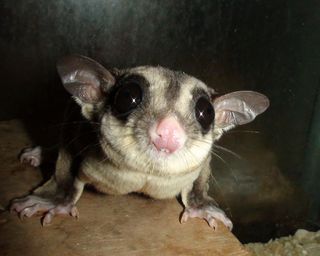 The sugar glider (Petaurus breviceps) behaves and looks much like a flying squirrel, but is a marsupial.
(Image: © Andrey Giljov, Karina Karenina and Yegor Malashichev)

Humans aren't the only creatures that prefer to use one hand over the other. Now, a new study finds that marsupials that run about on all fours have paw preferences, too.

In particular, sugar gliders and gray short-tailed opossum females are more likely to prefer using their left front paw for such tasks as eating, leaning and gathering nest materials. Male opposums, on the other hand, go with the right more often, and male sugar gliders are evenly split.

That's the opposite pattern as seen in humans, where lefties are more likely to be men.

"We showed for the first time that sex-dependent handedness is reversed in marsupials if compared to other mammals," said study researcher Yegor Malashichev of St. Petersburg State University in Russia. "So they demonstrate an alternative way of developing handedness."

It's no surprise that paw preference shows up in the squirrelly sugar glider (Petaurus breviceps) or the mouselike gray short-tailed opossum (Monodelphis domestica), a South American native very unlike the opposums seen rummaging in garbage cans in North America. Some degree of side preference, or lateralization, has been found in animals ranging all the way from fish up to primates. [Gallery: Photos of the World's Cutest Marsupials]

Some theories hold that handedness becomes more pronounced the more vertical the animal, Malashichev told LiveScience. A primate that needs to grasp a branch while reaching for fruit with the other hand might be more likely to evolve a hand preference than one that mostly trots around on all fours. Marsupials make a great test for this theory, Malashichev said, because some species walk on all fours, like sugar gliders and gray short-tailed opossums, whereas others, such as kangaroos and wallabies, spend more time on two legs.

Now, the scientists have turned to quarupedal marsupials. They took video of opossums and sugar gliders in a zoo, recording the animals' paw preferences as they fed on insects and non-living food. They also watched which paw the animals preferred to lean on when they stood in a three-legged stance, and which paw they used most when collecting nesting materials.

The results revealed weaker hand preferences than in the upright wallabies, supporting the theory that posture promotes handedness. But the marsupials did still show trends. For example, when feeding on non-living food, eight of the opossums were clearly left-pawed, eight were right-pawed and 10 were ambidextrous. For the same task, 11 of the sugar gliders preferred their left paws, five their right and seven either. (The animals didn't show significant differences in hand preference across tasks.)

These differences were sex-dependent, the researchers found, with females generally preferring their left sides and males their right, especially among opossums. The sugar gliders showed a similar, though weaker, pattern.

In other mammals, males are more likely to lean left, and most individuals are righties, a pattern completely reversed in the marsupials, Malashichev said. The reason may have to do with brain structure. Non-marsupial mammals have a bridge called the corpus callosum connecting the left and right sides of their brains. The corpus callosum is responsible for communication between the two brain hemispheres, making it important for motor coordination. Marsupials lack this structure (they have links between brain hemispheres), so their evolution of handedness may be different.

The researchers now have funds from the National Geographic Society to study handedness in wild marsupials. They're also interested in looking at species that are often vertical but upside-down, such as bats.

"How will handedness be manifested in those?" Malaschichev asked. "The future work should give full answers."