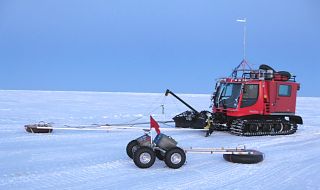 Meet Yeti, a faithful rover of the robotic kind that sniffs out dangerous crevasses for convoys crossing the glaciers of Antarctica and Greenland, explores ice caves on an active volcano and finds old buildings buried under the polar ice.

This southern summer, Yeti trundled ahead of the bright orange tractors that deliver supplies to research outposts throughout Antarctica. Towing a ground-penetrating radar, the rover alerts drivers to hidden breaks in the ice. Snow often bridges the fissures, obscuring hazards, but the little robot is light enough (150 pounds, or 68 kilograms) to ford the breaks if not stopped in time.

"It's not likely to fall through, and there's no danger to the robot except losing the robot," said Laura Ray, an engineer at Dartmouth College in Hanover, N.H., who led the robot's development. [Watch Yeti guide a tractor in Greenland]

Preventing injuries and equipment damage is crucial in Antarctica, where rescue operations are dangerous for both the injured and the rescue crews.

But Yeti offers more than protection for polar researchers. In December 2012, scientists mapped ice caves on Mount Erebus, an active volcano, with the radar. The robot also helped find abandoned, long-buried buildings from the original South Pole research station in December 2011. The structures were demolished after a tractor fell through ice atop one of the buildings. The robot also aids convoys in Greenland.

Yeti isn't the first robot to ply the Antarctica ice, but it is the smallest now roving on the continent's frozen surface. Researchers are also peering at buried glacial lakes with micro-submarines or mapping the seafloor with remotely operated vehicles. Earlier robotic explorers include the spiderlike Dante, sent into Mount Erebus in 1992; the Nomad rover, which hunted for meteorites in 2000; and a robotic rover tested by Kansas University in 2005.

Ray thinks Yeti or similar robots can further complement polar research, for example, by finding buried streams and rivers. A robot will handily finish a survey of gridded points that would be tedious for people, she said.

"I do hope there's more of this because it's so costly to do science in these regions. Whatever you can do to reduce the cost enables you to do more science," Ray told OurAmazingPlanet.

Logistical costs — moving people — account for about 70 to 75 percent of most research budgets in Antarctica, Ray said. A National Science Foundation (NSF) report put the total cost of transportation and support even higher, at 90 percent of the polar science research budget. With the median NSF research grant at $125,000 in July 2012, any cost-savings in logistics frees up money for science. The Yeti-led supply convoys across the ice to McMurdo Station in Antarctica save $2 million annually over plane trips, the NSF estimates.

The Yeti robot, conceived and built by Dartmouth engineering students, cost about $25,000, Ray said. The Mars Curiosity Rover cost $2.5 billion to design, construct and land on another planet.

Constructed from off-the-shelf parts and batteries sturdy enough for very low temperatures, the rover has been a popular addition to the United States polar science program.

"It's always in the field or in transit," Ray said. "I would love to make a second or a third robot, or transfer this technology to a company so we can get them into more hands."