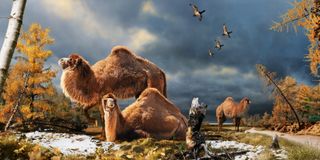 High Arctic camels, like those shown in this illustration, lived on Ellesmere Island during the Pliocene warm period about 3.5 million years ago.
(Image: © Julius Csotonyi)

Camels are the poster animals for the desert, but researchers now have evidence that these shaggy beasts once lived in the Canadian High Arctic.

The fossil remains of a 3.5-million-year-old camel were found on Ellesmere Island in Canada's northernmost territory, Nunavut. The camel was about 30 percent bigger than modern camels and was identified using a technique called collagen fingerprinting. The finding, detailed today (March 5) in the journal Nature Communications, suggests that modern camels stemmed from giant relatives that lived in a forested Arctic that was somewhat warmer than today.

"It's the first evidence that camels were ever there," lead study author and paleobiologist Natalia Rybczynski of the Canadian Museum of Nature in Ottawa told LiveScience."It is surprising because usually we associate camels with arid and semi-arid habitats."

[See Images of the Arctic Camel and Fossils]

Camels, which belong to the Camelus genus, originated in North America during the Eocene period about 45 million years ago, and later crossed to Eurasia over the Bering Isthmus, a landbridge between Alaska and Russia. Their closest relatives are llamas, alpacas, vicunas and guanacos.

The researchers found about 30 pieces of bone that were part of a camel's tibia, or shinbone. The fossil's location moves the known range of North American camels northward by about 745 miles (1,200 kilometers).

The camel's identity and age were determined via collagen fingerprinting, a technique that measures the amount of a bone protein called Type I collagen. Different mammals have characteristic amounts of this protein, which survives longer than many other biological molecules in the body.

The team dated the fossil to roughly 3.5 million years ago, a period known as the mid-Pliocene warm period. The global temperature was about 3.5 to 6 degrees Fahrenheit (2 to 3 degrees Celsius) warmer than today, Rybczynski said, and about 33 degrees F (18 degrees C) warmer where the camel was found, with temperatures averaging around 30 degrees F (minus 1.4 degree C). The Canadian High Arctic was forested then.

The fossil specimen closely resembles modern dromedary camels, based on the fingerprinting, but was about a third larger in size. It also bears similarity to the giant Yukon camels that lived about 1,240 miles (2,000 km) away from the site where the ancient camel bones were discovered.

The researchers plan to continue searching for camel remains in the High Arctic. "We hope to find more," Rybczynski said.