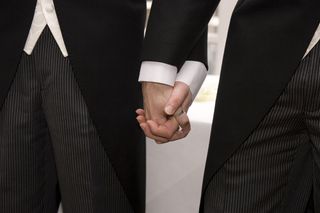 The final arbiter of word usage for most newspapers and online news outlets just added guidelines for "husband" and "wife," which include using the words to describe legally wed same-sex couples.

This is the first time the Associated Press (AP) has adopted a policy for the terms husband and wife. The organization publishes the "Associated Press Stylebook," a guide that determines grammar and word choice for AP stories as well as many media outlets.

"All the previous conversation was in the absence of such a formal entry," on marital terms, AP senior managing editor for U.S. news Mike Oreskes said in a statement. "This lays down clear and simple usage. After reviewing existing practice, we are formalizing 'husband, wife' as an entry."

The entry reads, "Regardless of sexual orientation, husband or wife is acceptable in all references to individuals in any legally recognized marriage. Spouse or partner may be used if requested." [5 Myths About Gay People Debunked]

The change comes after a leaked internal memo revealed the AP's policy of using "partners" or "couples" to describe people in either civil unions or same-sex marriages. That memo triggered indignation from media outlets and writers arguing that civil unions are not equivalent to marriage.

A spokesman for the AP declined to comment on the new husband/wife entry.

"At this point, after a great deal of discussion already, these AP style points will speak for themselves," said Paul Colford, the director of media relations for the Associated Press.

The nod to increased legalization of same-sex marriage is just one recent change related to gay rights. In December, the AP nixed the use of "homophobia" in a social or political context, saying that a phobia is a form of mental illness.

That change means that referring to an anti–gay-rights activist as "homophobic" would be a no-no, according to the AP. Some psychologists praised the change.

"Homophobia represents only one of several sources of negative attitudes or reactions to gays and lesbians," University of Rochester psychologist Richard Ryan told LiveScience in December. "That is, one can be anti-gay without being homophobic."

While some people do have an irrational fear of gay people, meeting the definition of a phobia, Ryan said that other, non–fear-based factors can also play a role in anti-gay sentiment. Someone who condemns homosexuality based on religious teaching, for example, would not have a phobia. (The AP also nixed the word phobia to describe other political beliefs, forbidding "Islamophobia" to describe anti-Islam sentiment, for example.)

California legalized same-sex marriage in 2008, but later rescinded the law by voter decree; that vote is now being challenged in the U.S. Supreme Court, with oral arguments set to begin at the end of March.