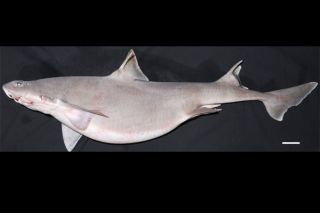 A male mandarin dogfish shark that was spotted along with a pregnant female in the waters off western Australia, far from their usual stomping grounds near Indonesia.
(Image: © Support Our Sharks.)

A rare shark couple found for the first time off the coast of Australia may force a rethink of the species' range.

Two years ago, a sport fisherman caught a pair of rare sharks off Rottnest Island in Western Australia. The duo, a male shark about 3.3 feet (1 meter) long and a pregnant female about 3.9 feet (1.2 m) long, looked different from the sharks that normally prowl the Australian waters. The female was carrying 22 pups.

The fishermen gave the sharks to ocean researchers at the University of Western Australia. After analyzing the sharks' DNA, the team concluded that the sharks were mandarin dogfish sharks, which are normally spotted only in the waters off Indonesia, Japan and New Zealand.

"After two years of thorough investigation which included DNA sequencing, the sharks were identified as mandarin dogfish (Cirrhigaleus barbifer), a species never before seen in Australia," said study co-author Ryan Kempster, a marine neuroecologist at the conservation group Support Our Sharks.

The new discovery reveals that the shark has a much larger range than previously thought. The scientists don't know exactly why the sharks strayed so far from their normal habitat.

The discovery of 22 pups was also a surprise. Scientists have only discovered two other pregnant sharks of this species, and those specimens weren't carrying so many sharks.

"Previously, it was thought that the maximum number of pups for this species was 10," Kempster said in a statement.

The analysis of the sharks was published Feb. 28 in the journal Marine Biodiversity Records.