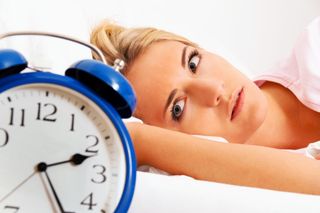 Nightmares and unhealthy beliefs about sleep may increase the risk of suicide in people who are depressed, a new study suggests.

The findings reaffirm earlier research linking sleep problems to an increased risk of suicide, and suggest which symptoms doctors might want to target with treatment to reduce that risk, the researchers said.

Unhealthy beliefs about sleep can take several forms: for example, the thought that a poor night's sleep will disturb sleep for the whole week, or that sleep loss will have dire and irreversible consequences. Such ideas carry an atmosphere of hopelessness, an emotion researchers know is connected to suicide risk.

"Insomnia can lead to a very specific type of hopelessness, and hopelessness by itself is a powerful predictor of suicide," said study researcher Dr. W. Vaughn McCall, chair of the Department of Psychiatry and Health Behavior at Georgia Health Sciences University in Augusta.

While the factors that contribute to suicide risk are not the same for everyone, "For some patients, I think sleep problems are part of the [symptom] profile," McCall said.

During the study, McCall and colleagues surveyed 50 depressed people ages 20 to 84, some of whom were in the hospital. Nearly every patient was taking some type of psychiatric medication, and 56 percent had attempted suicide at least once.

The study participants were surveyed to assess their degree of insomnia and suicidal thinking, as well as whether they experienced nightmares or unhealthy beliefs about sleep.

The study found a link between insomnia and suicidal thinking: The more severe a person's insomnia was, the more likely he or she was to express suicidal thoughts and desires. However, when the researches took into account whether or not individuals experienced frequent nightmares or unhealthy beliefs about sleep, the link disappeared. This indicates the two factors —nightmares and unhealthy beliefs about sleep —play a role in the link.

Earlier studies have found that people with insomnia are up to twice as likely to commit suicide as people who don't have such difficulties sleeping. A 2011 study in teens found that those who had sleep problems at ages 12 to 14 were 2.5 times more likely to have suicidal thoughts in their late teen years.

Depending on the person, insomnia could be a cause or an effect of depression, McCall said. Insomnia may exacerbate depression because people feel they cannot find relief or escape from their condition, even at night, he said.

The new study, along with previous work, suggests that people with insomnia should be evaluated for mental illness, including depression and suicide risk, McCall said.

Pass it on: Insomnia may increase the risk of suicidal thoughts.