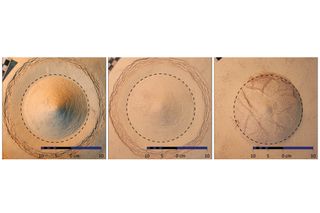 The way gravity deforms volcanoes could help explain mysterious features seen in volcanoes on Mars, Earth and elsewhere, as well as potentially revealing risks that volcanoes pose to neighboring communities on Earth, a group of researchers says.

Gravity can make large volcanoes warp under their own weight in two ways: they can either spread outward on top of their "basement" of underlying rock or sag downward into that basement.

The way volcanoes deform strongly influences the stability of their structures, and when and how they erupt. To learn more about how gravity can change the shape of volcanoes, researchers built models simulating a range of deformation styles, from pure spreading to pure sagging.

The scientists developed models consisting of large containers in which the researchers placed silicone putty mimicking the pliable part of the Earth's uppermost layers. On top of that, the scientists placed sand and gypsum to reflect the more brittle layers of a volcano's basement. Finally, researchers poured more sand and gypsum on top to build cones representing volcanoes and waited about 10 to 60 minutes to let the cones deform their basements. For some models, the team added a thin silicone layer just below the cone's base, imitating certain weak basement materials, such as waterlogged rocks.

"I can certainly say it was good fun, if messy," said researcher Paul Byrne, a planetary geologist at the Carnegie Institution of Washington. "The gypsum powder we used to increase sand cohesion had a tendency to settle on everything in the lab, and the silicone gel was impossible to control once it was out of a container. I wrote off more than a few pairs of pants, shoes and lab coats during the experiments I conducted."

The researchers took digital photos as the models developed and used special software to measure, with exceptional detail, how the structures' surfaces deformed over time.

"Our experimental method is sufficiently straightforward that these experiments can be carried out in high school labs, which could encourage the next generation of earth and planetary scientists," Byrne told OurAmazingPlanet.

The researchers saw that a range of volcano spreading and sagging evolved, depending on the rigidity and strength of a volcano's basement compared to the size of the volcano it supported. Spreading occurred when the basement was rigid, as appears to be the case with the volcanic island of La Réunion in the Indian Ocean, while sagging happened when a volcano and its basement deformed together, as is the case with Elysium Mons on Mars.

Sagging and spreading can also happen at the same time, when a volcano and its basement deform separately. These interactions may explain features seen at Olympus Mons on Mars and with volcanoes on Hawaii, the largest volcanoes on Mars and Earth, respectively. Such activity may explain puzzling terraces seen jutting a bit like steps out fromthese structures' mid-to-upper flanks.

"Our models can reproduce, and so help explain, the range of structural complexity seen on volcanoes across the solar system," Byrne said. "In particular, we are able to tie the various enigmatic structural features on the largest known volcano, Olympus Mons on Mars, into a single model, which is rewarding as I've been studying this volcano since 2005."

Such research could help assess the hazards that different volcanoes pose. For instance, "a volcano that's more likely to spread than sag is at greater risk of suffering landslides or a full-blown flank collapse, and vice versa for a sagging volcano," Byrne said. These studies could also reveal likely sagging- or spreading-influenced sites of eruptions.

Byrne added that his team could start to think "about other, smaller volcanoes on Earth and Mars, and not just some of the very largest, like [those in] Hawaii or the enormous Olympus Mons. Moreover, we can look to apply these results to yet other extraterrestrial volcanoes, such as the shield volcanoes on Venus, structures named for their resemblance to a warrior's shield laid on the ground.

"And we can apply the insights gained from our laboratory models to numerical models, and so begin to get a more detailed understanding of how gravity-driven volcano deformation works mechanically."

Byrne and his colleagues detailed their findings online Jan. 17 in the journal Geology.