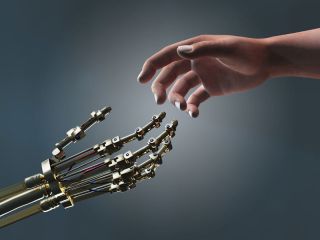 People are looking more and more to robotic toys and tools for companionship, and less to other people, said Sherry Turkle, a professor of the social studies of science and technology at MIT.
(Image: © photobank.kiev.ua | Shutterstock)

BOSTON — It's time humans reexamined our relationships with machines, and alter course before it's too late, a prominent scientist said here Friday (Feb. 15) at the annual meeting of the American Association for the Advancement of Science.

People are looking more and more to robotic toys and tools for companionship, and less to other people, said Sherry Turkle, a professor of the social studies of science and technology at MIT. Innovations such as Siri, Apple's iPhone digital assistant, have trained people to rely on machines in new ways, Turkle said, and to envision a future where robots are advanced enough to serve as teachers for the young, and caretakers for the old.

"The idea of some kind of artificial companionship has already become the new normal," Turkle said. "Kids play with robotic pets, become allies with computer game agents. But I think that this new normal comes with a price. For the idea of artificial companionship to become our new normal, we have to change ourselves, and in the process we are remaking human values and human connection."

Turkle studies people's thoughts and feelings about robots, and has found a culture shift over time. Where subjects in her studies used to say, in the 1980s and '90s, that love and friendship are connections that can occur only between humans, people now often say robots could fill these roles.

For example, Turkle has studied Paro, a robotic baby seal that's been used as a companion for older adults with dementia or depression. It was widely seen as a great advance, Turkle said, when one grief-stricken woman was able to talk to Paro and be comforted by it.

Many experts say in the future, robots could be better caretakers for the elderly, because they could be programmed with endless patience, and would never be abusive, inept or dishonest.

But Turkle worries about this drive to replace human caretakers with robots. [5 Reasons to Fear Robots]

Children, in turn, play with more and more robotic and electronic toys. Many, like the Tamagotchi digital pets of the 1990s, and the later robotic dog Aibo, require nurturing, which encourages kids to take care of them, and therefore, to care about them. Some kids say they prefer these pets to real dogs and cats that can grow old and die.

"People used to buy pets to teach their children about life and death and loss," Turkle said. We are now teaching kids that real living creatures are risky, while robots are safe.

Tukle interviewed a teenage boy in 1983, asking him whom he would turn to, to talk about dating problems. The boy said he would talk to his dad, but wouldn't consider talking to a robot, because machines could never truly understand human relationships.

In 2008, Turkle interviewed another boy of the same age, from the same neighborhood as the first. This time, the boy said he would prefer to talk to a robot, which could be programmed with a large database of knowledge about relationship patterns, rather than talk to his dad, who might give bad advice.

"In 25 years, human fallibility has gone from being an endearment and a tie that binds, to being an unnecessary liability," Turkle said. "For me the most important job of childhood and adolescence is to learn attachment and trust in other people. We are forgetting crucial things about the care and conversation that can only occur between humans." [5 Ways to Foster Self-Compassion in Your Child]

In her interviews with people of many ages and backgrounds, Turkle has found that many now are coming to fantasize about robots that could serve as friends who would always listen to us, who would never become angry, who would never disappoint.

Though robots aren't yet advanced enough to provide the perfect illusion of companionship, that day is not far off.

"We are now at what I call the robotic moment," Turkle said. "Not because we have built robots worthy of our company but because we are ready for theirs."

Now is the time, she said, to step back and reconsider how and when we want to let machines into our lives, and when we should turn them off.