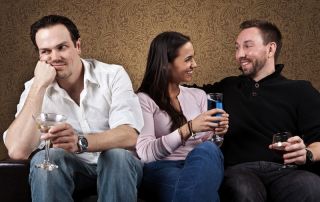 Just in time for Valentine's Day, science has revealed the reason why coupled people pity singles and why singles think couples are boring.

It turns out that no matter your relationship status, people just don't think outside their own experiences very well.

According to the new research people believe their own life status is best for everyone. This is most true for people who think their status is unlikely to change — those singles who can't imagine settling down, for instance, or the married couple who would never break up.

"We often become evangelists for our own lifestyles," the study researchers write in an upcoming article in the journal Psychological Science. "When it comes to our relationship status, we are rarely content to simply say, 'being single works for me' or 'being in a relationship suits my disposition.'"

This tendency could lead us to judge others even in non-romance areas of life, the researchers found.

Tension between the coupled and single people of the world is apparent in book titles like, "The Panic Years: A Guide to Surviving Smug Married Friends, Bad Taffeta and Life on the Wrong Side of 25 Without a Ring" (Crown Archetype, 2008) or in Valentine's Day's alter-ego, "Singles Awareness Day," a holiday celebrated on Feb. 13 or 14 out of spite for the pink-roses-and-champagne blowouts of the coupled world.

In fact, both couplehood and being single both have their pros and cons, wrote Kristin Laurin of Stanford University and her colleagues David Kille and Richard Eibach of the University of Waterloo. But people may idealize their own status and denigrate that of others in order to stay content with their choices. [6 Scientific Tips for a Successful Marriage]

To find out if this insecurity might be at the root of relationship-status judgments, the researchers first recruited 80 single and coupled undergrads and asked them about their relationship stability and satisfaction. The participants then answered questions about whether or not other people should emulate their relationship status.

The results revealed that no matter how happily or unhappily single or coupled the person was, the more they saw themselves as "stuck" in that role, the more they felt others should do as they were doing.

In some cases, Nicole and Nick were said to be single; in others, they were partnered with others. The researchers asked the participants how likely Nick or Nicole was to have a happy, fulfilling evening.

As in the first study, participants who reported themselves as either in a stable relationship or single for the long haul saw themselves in others. Committed singles were more likely to say that Nick or Nicole would have a good Valentine's Day if the character was also described as single; seriously coupled folks were more likely to say Valentine's Day would be fun and fulfilling for Nick or Nicole if the character was also coupled. [Busted! 6 Gender Myths in the Bedroom & Beyond]

The researchers found similar results in a fourth study asking people to judge a potential political candidate. That study found that people are most likely to act on their biases against people not like them when they have some other excuse to dislike them (in this case, support for an extreme political policy).

The research is the first to show that both single and coupled people are prejudiced against those who don't have their same relationship status, the researchers wrote.

“People may be aware of their own tendency to idealize being single or coupled, but they may not realize that this can impact how they respond to others — and how others respond to them,” they added.