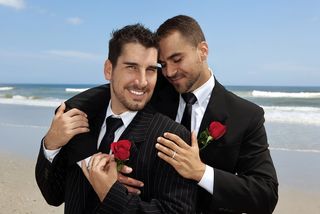 Shortly after news that the Supreme Court will hear cases concerning same-sex marriage this term, a new study finds that legal recognition of relationships may improve the mental health of gays and lesbians.

The findings come from the first large-scale study of how marriage influences the mental health of gay, lesbian and bisexual people. Researchers have long known that marriage and good mental health are linked in heterosexual people. Realizing that gay relationships are still stigmatized and that married gay couples don't get many of the federal benefits straight couples expect, University of California, Los Angeles, public health researcher Richard Wight wanted to know if marriage would be beneficial for same-sex couples' psychological functioning, too.

"We were interested in, taking all of that stuff into consideration, if there's still a benefit of being in a same-sex marriage in terms of your mental health," Wight told LiveScience.

Fortunately, California provided Wight and his colleagues a chance to find out. Since 2005, same-sex couples can register as domestic partners in the state, an arrangement that grants some of the legal benefits of marriage. In June 2008, a California court opened up the institution of marriage to same-sex couples in the state. That decision was overturned by Proposition 8, which ended same-sex marriages in November of the same year. Proposition 8 is currently under review by the Supreme Court, but  new same-sex marriages have been put on hold in California pending a final ruling.

The researchers used the 2009 California Health Interview Survey, a biannual state phone survey focused on psychological health and marital status, to look for differences between those groups, as well as straight people. Their total sample came to more than 36,700 people, including more than 1,000 gay, lesbian or bisexual Californians. [5 Myths About Gay People Debunked]

Participants were asked about their level of psychological distress, or how nervous, hopeless, restless, depressed and worthless they'd felt recently. Feeling these emotions frequently is a sign of poor mental health.

About 7 percent of gays, lesbians and bisexuals in the sample were in a same-sex marriage, compared with 50 percent of straight participants who were married to the opposite sex. The researchers found that lesbians as well as wealthier and older gay individuals were more likely to be in same-sex marriages than gay men and lower-income, younger individuals. Higher-income heterosexuals were also more likely to be married than their poorer counterparts.

The researchers controlled for these demographic differences as well as others that influence mental health, such as race, education and self-rated physical health. After doing so, they found that marriage is linked to an increase in well-being for both straight and gay people.

Both being in a registered domestic partnership and being married were linked to better mental health for same-sex couples, the researchers report today (Dec. 13) in the American Journal of Public Health. The difference between the two was not stark, Wight said, but "same-sex marriage appears to be the better predictor of psychological well-being than being in registered domestic partnership."

The current study doesn't prove that marriage itself causes the mental-health boost, Wight warned. Especially given the narrow window of opportunity, better-adjusted gay couples may have been the ones to take the leap into marriage in 2008. Regardless of sexual orientation, mentally unhealthy people may be less likely to tie the knot than mentally healthy individuals.

However, long-term research on heterosexual marriage does suggest that getting wed boosts mental health (barring issues like abusive relationships). The marriage mental-health boost may come from an increase in interpersonal support, better finances and stronger feelings of self-worth and being cared for. There's no reason to think the same wouldn't be true for gay couples, Wight said.

Given discrimination against gay couples, Wight said he might have expected marriage to be less beneficial to them than to straight couples. But in fact, being married completely negated the often-seen mental-health disparity between gays and straights caused by anti-gay discrimination. Instead of falling behind heterosexuals in mental health, gay people in legal marriages were just as psychologically healthy as straight people in general.

"I think it's a little bit surprising, because lesbian, gay and bisexual couples don't garner the same benefits that heterosexuals do because of the legal pitfalls and because same-sex relationships are so highly stigmatized," Wight said.

Wight added that the work has public health repercussions.

"I think it's reasonable to think that legally blocking people from marriage can put their mental health at risk," he said. "The Supreme Court should consider this when they're mulling over this decision."

Editor's Note: This article was updated at 4:20 p.m. ET to correct the date of Proposition 8's passage to November.