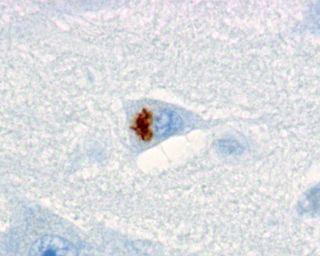 A protein clump (brown) in the hippocampus in the brain of a person with a gene mutation linked to dementia.
(Image: © Kohji Mori and Dieter Edbauer)

Certain forms of dementia may be caused by a gene mutation that makes proteins in the brain clump together, a new study finds.

The most common cause of frontotemporal dementia and a motor neuron disease called amyotrophic lateral sclerosis (ALS, or Lou Gehrig's disease) is a genetic mutation that creates extra copies of a DNA sequence, but the actual mechanism of the diseases is unknown. A team of researchers has now found that proteins, molecules that normally help cells function, are being produced from the mutated gene and appear to be causing the clumping seen in both those diseases.

The findings, described online today (Feb. 7) in the journal Science, could explain how these diseases arise and might even be treated.

About 10 percent of FTLD (frontotemporal lobar degeneration) and ALS patients have a mutation in the C9orf72 gene, which contains a short repeated DNA sequence. Healthy people have about 25 repeats of this sequence, but there are hundreds of repeats in these patients. Their brains exhibit telltale clumps of proteins in the hippocampus and cerebellum regions.

While proteins in other forms of dementia are known, patients with this mutation have clumps of other, unknown proteins, said study co-author Dieter Edbauer, a neuroscientist at Ludwig Maximilian University of Munich, in Germany. The mutated gene lacks the label that normally tells cells to start making a protein, and is located in a stretch of the DNA that isn't normally active.

Edbauer and his colleagues hypothesized that if the gene were somehow activated, it would cause three different proteins to be made, and these proteins would aggregate in cells and cause disease.

To test their hypothesis, the researchers took both diseased and healthy brain tissue from deceased patients and filtered it through a fine mesh. Clumps of brain tissue from the patients got stuck in the mesh. By making antibodies (proteins produced by the body to target and fight off foreign invaders) that recognized the three specific proteins, the scientists were able to determine that these were the proteins in the clumps.

"This study helps to resolve a major question about how C9orf72 mutations cause FTD and ALS," said neurologist Adam Boxer of the University of California, San Francisco, who was not involved in the study.

"It suggests that these mutations can lead to creation of a new toxic protein that aggregates and accumulates in cells, similar to other neurodegenerative diseases such as Huntington's and Alzheimer's, which are also associated with toxic protein aggregates," Boxer told LiveScience. [10 Odd Facts About the Brain]

Others agree that the findings, if replicated, will be important. "It would be good to confirm their results using an independent method," said neuropathologist Ian Mackenzie of Vancouver General Hospital and the University of British Columbia, in Canada.

It's unclear whether the clumps are causing the diseases or are simply markers. If the protein clumps are in fact responsible, scientists might be able to treat the disease by getting rid of those proteins, Edbauer said.

FTD and ALS are characterized by personality changes, language abnormalities and movement disorders, which often appear before the age of 65. There is currently no cure.