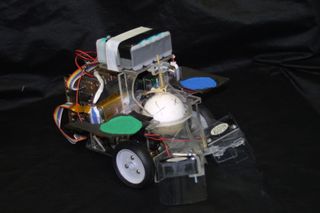 Beware of robots driven by small insects. A group of researchers has put a silkmoth in the driver's seat of a small two-wheeled robot to study how the insect tracks down smells.

Understanding the scent-tracking behavior of a silkmoth (Bombyx mori) could help scientists develop robots that are able to sense environmental spills and leaks by smell, according to the new study.

Researchers chose to use a male silkmoth because of the distinctive mating dance it uses to zero in on a pheromone — a chemical signal from its mate. The insect moves in a straight line, followed by zigzagging, a pattern that allows it to detect clusters of odor molecules.

The moth was able to "drive" the robot by walking on a rotating polystyrene ball onboard, like a trackball controlling a computer cursor. The insect drove the robot inside a wind tunnel, which simulated the flow of air the moth would feel if it were flying. The moth drove upwind to track the pheromone. [See Video of the Moth Driving]

The moth successfully located the source of the scent and drove the robot toward it in all initial trials. When the researchers covered the robot with white paper — essentially blindfolding the moth — it was still able to reach the target (the pheromone source) about 84 percent of the time.

Then the researchers tweaked the robot to make it veer more toward one side. The moth compensated by walking in the other direction on the steering ball, making it to its target about 80 percent of the time. When the robot was made to veer to the side and also blindfolded, the moth only found its target 54 percent of the time. The results suggest the insect was steering by both its sense of smell and its sense of sight.

The researchers also introduced a delay between when the moth sent steering commands (by walking on the ball) and when the robot actually started turning. The moth's control of the robot worsened gradually when the delay was longer, but it could still drive the robot to the goal most of the time.

The study builds on previous work aimed at understanding odor-guided navigation, biologist Mark Willis of Case Western Reserve University, who was not involved in the research, told LiveScience. "We don't have a man-made odor detector that's anywhere near as good as what the biological world has on offer," Willis said.

Further experiments with the insect-controlled robot will provide a "blueprint" for biologically inspired robots, the researchers reported today (Feb. 5) in the journal Bioinspiration and Biomimetics.