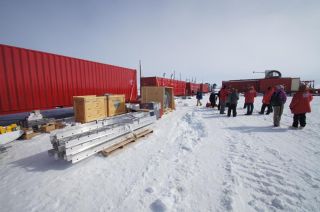 The Whillans Ice Stream Subglacial Access Research Drilling project (WISSARD) is using a variety of tools and techniques to explore Subglacial Lake Whillans and the nearby grounding zone, on the southeastern edge of the Ross Sea.
(Image: © Govert Schilling)

As a sterilized video camera dropped through a borehole in the ice, U.S. scientists camped at Lake Whillans in Antarctica became the first to see the bottom of a lake trapped underneath the glacial ice for thousands of years.

On Monday, the team pulled mud and water from the lake floor, 2,625 feet (800 meters) below the surface of the ice, marking the Whillans Ice Stream Subglacial Access Research Drilling (WISSARD) mission a success, the researchers said on the project's blog.

"This effort marks the first successful retrieval of clean whole samples from an Antarctic subglacial lake," the researchers said on the WISSARD site.

Drilling operations at Lake Whillans began on Jan. 21, after tractors pulled equipment, generators and 500,000 pounds (227,000 kilograms) of fuel to the drilling site, and the science team flew in from McMurdo Station on the Antarctic coast. [See Photos of Subglacial Lake Whillans Drilling Site]

Water and sediment samples returned to the surface will be examined for microbes and other signs of life; clues to past climate; and interactions between under-ice water and the overlying ice sheet. Some of the samples will be tested on-site, in a lab set up in a shipping container, and some will be sent back to the United States for further study.

The U.S. effort was one of three attempts to drill into one of Antarctica's buried lakes during the southern summer. The others are at Lake Ellsworth and Lake Vostok. Lake Whillans was closest to the surface of the three lakes by more than a mile (2 kilometers). Also, unlike the deeper pair, which may have been isolated for millions of years, Lake Whillans regularly fills and drains with water from subglacial streams.

A British-led team called off their attempt to drill into buried Lake Ellsworth on Christmas Eve due to technical problems with their hot-water drill. On Jan. 14, Russian scientists said they retrieved water samples from Lake Vostok, buried beneath more than 2 miles (3 km) of Antarctic ice. The Russian search for extreme life in Vostok has so far returned only drilling mud contaminants, but results from this year's work have not yet been released.