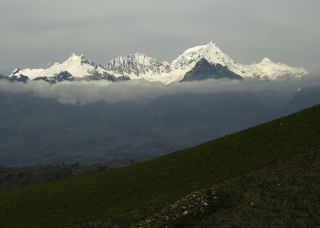 The ice-capped peaks of the Cordillera Blanca mountain range in Peru, seen in 2007.
(Image: © Giulia Curatola, Philipps-Universität Marburg, distributed by the EGU under a Creative Commons license.)

The glaciers of the Andes Mountains have retreated at an unprecedented rate in the past three decades, with more ice lost than at any other time in the last 400 years.

That's according to a new review of research that combines on-the-ground observations with aerial and satellite photos, historical records and dates from cores of ice extracted from the glaciers. The retreat is worse in the Andes than the average glacier loss around the world, the researchers report today (Jan. 22) in the journal The Cryosphere.

"Tropical Andes glaciers have lost on average between 30 to 50 percent (depending on the mountain ranges) of their surface since the late 70s," study researcher Antoine Rabatel, a scientist at the Laboratory for Glaciology and Environmental Geophysics in Grenoble, France, wrote in an email to LiveScience.

The Andes Mountains of South America are home to 99 percent of tropical glaciers ­— permanent rivers of ice at high enough elevations not to be affected by the types of balmy temperatures usually associated with the tropics. But these glaciers are particularly sensitive to climate change, because there is little seasonality in temperatures in the tropics, Rabatel said.

"Glaciers of the tropical Andes react strongly and more rapidly than other glaciers on Earth to any changes in climate conditions," he said. [Ice World: Gallery of Awe-Inspiring Glaciers]

To piece together the story of the glaciers over the past centuries, Rabatel and his colleagues drew on disparate strands of data. Historical records from early settlements reveal glacier boundaries, as does ice core data taken by drilling down into the annual layers of ice that make up glaciers. Even the lichens (symbiotic organsism made of fungus and an algae or bacteria) that survive on the rocky debris, or moraine, that forms around a glacier have a story to tell. Researchers can date these lichens to determine how long ago the rocks were exposed and free of ice.

Aerial photographs dating back to the 1950s and satellite imagery from as far back as the 1970s also tracks the glaciers' movements. Finally, direct, ground-based observations have been in place at many glaciers since the 1990s.

Retreat of the glaciers

All together, the data tell a story of ice loss. The Andean glaciers reached their maximum extents in the Little Ice Age, a cool period that lasted from about the 16th to 19th centuries. In the outer tropics of Peru and Bolivia, the glaciers hit their maximums in the 1600s, the researchers found. The highest Andean glaciers maxed out in the 1730s or so, while lower-elevation glaciers reached their peaks around the 1830s.

The average loss of 30 percent to 50 percent varies widely from glacier to glacier, Rabatel said. Some small glaciers have completely disappeared, such as the Chacaltaya glacier of Bolivia, which was once the world's highest ski resort, but which vanished in 2009.

Lower-altitude glaciers below about 17,700 feet (5400 meters) above sea level are melting twice as fast as those at higher elevations. These low glaciers, which make up the majority of Andes glaciers, are expected to vanish within years or decades, Rabatel said.

Precipitation in the region has not changed, the researchers found, but temperatures have risen nearly 0.2 degrees Fahrenheit (0.1 degrees Celsius) per decade over the last 70 years. That means it's likely atmospheric heat rather than lack of snow is driving the glacier retreat.

The looming loss of the glaciers is a major problem for the people living in arid regions west of the Andes, Rabatel said.

"The supply of water from high-altitude glacierized mountain chains is important for agricultural and domestic consumption, as well as for hydropower," he wrote.