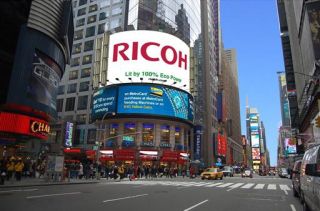 Artist rendering of the Ricoh billboard in Times Square to be located at Seventh Avenue and 42nd Street.
(Image: © PRNewsFoto/Ricoh Americas Corporation)

An electronic billboard entirely powered by the sun and wind is set to go up in Times Square in December, a company said today.

The "eco-friendly" billboard is the first of its kind in Times Square and the eastern United States, the second in the United States and the third in the world, said Ricoh Americas Corp. spokesman Russell Marchetta.

The billboard, for Ricoh Americas' parent company Ricoh Company Ltd. of Tokyo, will measure 47 feet (14 meters) high by 126 feet (38 meters) long. Its floodlights will be powered on site by 45 solar panels and four wind turbines.

The result will reduce carbon dioxide usage by 18 tons a year, Marchetta said.

The office automation equipment and electronics supplier already has an electronic sign in Osaka, Japan, that is 100 percent solar- and wind-powered.

The first solar-powered billboard in the United States came last year when Pacific Gas and Electric erected one in San Francisco.

The new billboard will wrap around the corner of Seventh Avenue and 42nd Street. The exact image is yet to be announced, though an artist's rendering with a dummy image has been released.

"If the floodlights aren't on, you'll be able to see the sign. You just won't have the lights on it," he told LiveScience.