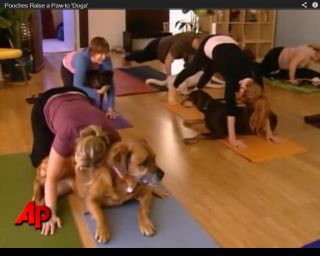 With people taking their dogs to restaurants, to dog-friendly resorts and to dog masseurs, it was probably only a matter of time before dog yoga, or "doga," classes came around the bend.

At Morris K9 Campus in Randolph, N.J., mellow sitar music fills the air as several dog owners stretch, flex and practice deep breathing with their pooches by their sides. But the dogs are not just passive observers, the New Jersey Star-Ledger reports: Yogis also encourage the animals to perform moves like back stretches and (of course) downward dog.

The pups in this yoga class are noticeably quiet and well behaved. "He shuts off in every doga class, and he's super high-energy" normally, Robin Lash, a trainer at Morris K9 Campus, told the Star-Ledger, referring to her border collie, Gabriel.

Lash claims the class helps make dogs less prone to arthritis and injuries as they age.

But the introduction of dogs to the ancient tradition doesn't sit well with all yoga participants. "Doga runs the risk of trivializing yoga by turning a 2,500-year-old practice into a fad," Julie Lawrence, a yoga instructor in Portland, Ore., told the New York Times.

Nonetheless, yoga for dogs has a growing following. The Coastal Humane Society in Brunswick, Me., has started giving doga classes to dogs at the shelter, reports the Falmouth, Me., Forecaster. Sara Sokol, a behavior and training coordinator at the shelter, hopes the classes will improve the behavior of dogs awaiting adoption, making them more likely to find owners.

"My biggest goal coming in here was to not only make the dogs more adoptable, but find … better fits for the dogs and the adopters," Sokol told the Forecaster. "And not only that, but make the time that the dogs are with us as good as it can be."