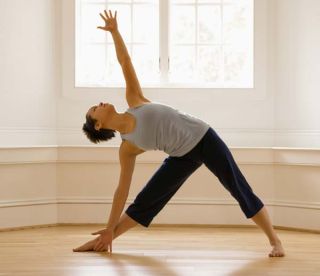 The stretches and contortions integral to the ancient Eastern practice of yoga were designed to blend body and soul, meshing the physical with the mental and spiritual. Modern-day science confirms that the practice also has tangible physical benefits to overall health benefits that can include improved brain function and denser bones.

According to the American Council on Exercise, more than 11 million Americans practice yoga and find that the poses (called asanas) and chants strengthen their bodies, center their minds and help them relax.

There are several types of yoga, but the physical benefits are similar regardless of the type practiced, experts say.

"It thickens the layers of the cerebral cortex, the part of the brain associated with higher learning, and increases neuroplasticity, which helps us learn new things and change the way we do things," said Fishman. He has used yoga in his medical practice to treat myriad conditions, including multiple sclerosis , carpal tunnel syndrome, arthritis and rotator cuff syndrome, he said.

"Yoga pits one group of muscles against another, exerting many times the force of gravity," he said. "That increases the stress on the bones, and the bones react to that by thickening."

"Relaxation is when the body and mind are in a state of balance," said Jasmine Kaloudis, a yoga instructor in Philadelphia. "It means releasing chronic muscle tension ... restoring natural diaphragmatic breathing, and improving oxygen absorption. The postures have many tangible physical benefits for every major system of the body."

Each type of yoga has a slightly different focus, and one may be more appropriate than another for people who have certain interests and abilities. According to American Council on Exercise spokeswoman Elizabeth Larkham, who is a yoga instructor in San Francisco, these types include:

"It would be considered the most athletic," Larkham said. Because of this, students sometimes are injured doing poses beyond their range of flexibility.

"It can be exceptionally beneficial for someone with a musculoskeletal injury," Larkham said. "It helps refine the body's alignment."

Practicing Bikram, however, may be dangerous for those with high blood pressure, a heart condition, diabetes or another chronic illness , according to the Cleveland Clinic.

Larkham and Kaloudis said each of the three categories of movements incorporated into most yoga types standing poses, inversions, and back and forward bends stimulates different bodily systems.

For example, standing poses strengthen leg muscles, open the hips and flex the back, improving circulation to the lower extremities, Larkham said.

Upside-down poses such as headstands, called inversions, increase blood flow to the heart, lungs and brain. They also "stimulate lymph to move toxins out of the body, which is beneficial for the lymphatic system," Kaloudis said.

Back bends make the spine more flexible, and stimulate the central nervous system, and could help people deal with negative emotions, Larkham said.

Forward bends are "calming and restorative for exhaustion and blood pressure," Larkham said.