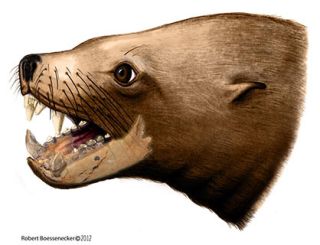 A "killer walrus" thought to have terrorized the North Pacific 15 million years ago may not have been such a savvy slayer after all, researchers say.

A new analysis of fossil evidence of the prehistoric beast shows it was more of a fish-eater than an apex predator with a bone-crushing bite.

Traces of the middle Miocene walrus, named Pelagiarctos thomasi, were first found in the 1980s in the Sharktooth Hill bone bed of California. A chunk of a robust jawbone and sharp pointed teeth, which resembled those of the bone-cracking hyena, led researchers to believe the walrus ripped apart birds and other marine mammals in addition to the fish that modern walruses eat today.

But a more complete lower jaw and teeth from the long-gone species were recently discovered in the Topanga Canyon Formation near Los Angeles. Researchers say the shape of the teeth from this new specimen suggest the walrus was unlikely adapted to regularly feed on large prey. Instead, they think it was a generalist predator, feasting on fish, invertebrates and the occasional warm-blooded snack.

"When we examined the new specimen and the original fossils, we found that the teeth really weren't that sharp at all — in fact, the teeth looked like scaled-up versions of the teeth of a much smaller sea lion," researcher Robert Boessenecker, a geology doctoral student at the University of Otago in New Zealand, told the PLOS ONE Community Blog.

Using a model to estimate body size based on the size of the jaw, Boessenecker and Morgan Churchill of the University of Wyoming found that Pelagiarctos was quite large — about 770 pounds (350 kilograms), or similar in size to some modern male sea lions. But they noted that a big body alone likely wouldn't indicate that the species was a dominant predator. That's because both large and small modern species in the pinniped family — which includes seals, sea lions and walruses — are dietary generalists that tend to eat mostly fish.

Boessenecker added that the new findings give a clearer picture of the modern walrus' evolutionary past. [Fun Facts About Walruses]

"Right now, there is only one modern walrus species but back then, walruses were a very diverse group," the researcher told the PLOS blog. "Many of these other extinct walruses had strange adaptations — such as the development of upper and lower tusks, gigantic body size, ultradense bones, unusually short forelimbs, and even the loss of all teeth aside from tusks. The myriad types of extinct walruses — Pelagiarctos included — beautifully demonstrate the often convoluted path that evolution can take."

The study was published online Wednesday (Jan. 16) in the journal PLOS ONE. Funding came from the University of Otago, the Geological Society of America, The Palaeontological Society, and the National Science Foundation.