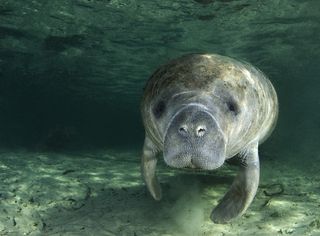 A fossil found in 2008 may be the missing link — for manatees, that is.

Modern manatees and their lookalike relatives, the dugongs, are close relatives of elephants, yet no trace of their ancestry had ever been found in Africa, where elephants evolved.

Then a small piece of skull was found unexpectedly in Tunisia. The fossil, which scientists have been able to identify as from an extinct sea cow, re-roots the origin of manatees in Africa, said study researcher Julian Benoit of the University of Science and Technology in Montpellier, France.

"No fossil Sirenian was found in this locality before," Benoit told LiveScience. "It was new and really exciting." [Sirenian Gallery: Photos of Cute Sea Cows]

Bulbous and gentle, the manatee is also a bit of a mystery. This marine herbivore, often called a sea cow, is part of a group known as Sirenians, which includes only four living species.

Sea cows are the closest relatives of elephants and hyraxes, small rodentlike mammals that also arose in Africa, and yet the oldest sea cow fossils come from Jamaica.

"It was a biogeographical paradox," Benoit said.

In 2008, however, researchers uncovered a fragment of sea cow bone from sediments in Djebel Chambi National Park in Tunisia. The site would have supported a freshwater lake when this sea cow lived some 48 million years ago.

The fossil happened to be the petrosal bone, which comes from the ear region of mammals. This was a stroke of luck, because the bone sits right next to the brain, inner ear, carotid artery, cranial nerves and other major structures, Benoit said. The bone molds to these structures, forming a unique shape for each species.

"When it is preserved as a fossil, the marks left by these soft tissues on the petrosal bone can be reconstructed with highly refined precision," he said.

These reconstructions allowed the scientists to compare the new fossil with living and extinct sea cows. The density of the bone also revealed that the sea cow from Chambi was an aquatic species. Combined with the fact that the ancient Lake Chambi was freshwater, the fossil suggests that primitive sea cow ancestors were not saltwater dwellers.

To get to Jamaica, however, the sea cows had to adapt, Benoit said.

"The dispersal of sea cows to Jamaica, maybe through the Atlantic Ocean, proves that adaptation to sea waters was a key event of their subsequent successfulness," he said.

The researchers report their results online today (Jan. 16) in the journal PLOS ONE.