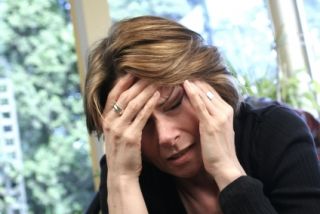 Women whose migraine headaches are accompanied by flashes of light or other changes in vision, called aura, may be at increased risk for a heart attack, a new study suggests.

In fact, after high blood pressure, migraine with aura was the second strongest contributor to the risk of heart attack and stroke — ahead of Type 2 diabetes, smoking and obesity, said study researcher Dr. Tobias Kurth, of the French National Institute of Health and Medical Research in Bordeaux.

The study only found an association, and the findings do not mean that all women who have migraines with auras will have a heart attack or stroke, Kurth said.

But the results suggest that women with migraines with aura should attempt to reduce their cardiovascular risk factors — for instance, by keeping their blood pressure under control, not smoking, and maintaining a healthy weight.

The findings agree with a growing body of evidence linking migraines to an increased risk of heart attack and stroke.

The new study involved 27,860 U.S. women ages 45 and older who did not have cardiovascular disease at the study's start. Of these, about 1,400 suffered from migraine with aura. During the 15-year study period, there were 1,030 cases of heart attack, stroke or death from a cardiovascular event.

It's not clear why having migraines with aura would increase the risk of heart attack and stroke. But it's possible that common factors may be involved in both migraines and cardiovascular events, Kurth said.

Migraines with aura occur when a blood vessels in the brain constrict, reducing blow flood to a certain area, said Dr. Ezriel R. Kornel, a neurologist at Northern Westchester Hospital in Mount Kisco, NY. When the blood vessels subsequently dilate, or enlarge to increase blood flow, this leads to pain, Kornel said.

"It's certainly possible that the same factor that's causing the initial constriction in migraines with aura is causing the constriction of blood vessels in the heart," which leads to a heart attack, said Kornel, who was not involved in the study.

Kornel said there's still a lot to explore with this topic, including future studies that take into account whether women are taking migraine medication — a factor that could influence the link.

The study will be presented in March at the American Academy of Neurology's annual meeting in San Diego. The study has not yet been published in a peer-reviewed journal.

Pass it on: Migraine with aura may increase the risk of heart attack and stroke in women.