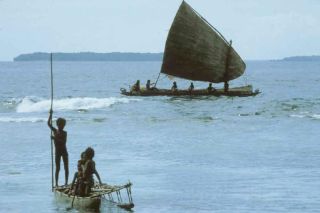 About 4,000 years ago, Australia was no longer connected to the mainland as it had been during the ice age. The immigrants thus crossed the ocean, arriving by boat and possibly carrying dingoes to the island continent.
(Image: © Gunter Senft/MPI for Psycholinguistics)

Indians migrating to Australia more than 4,000 years ago may have introduced dingoes to the island continent, along with novel stone tools and new ways to remove toxins from edible plants, researchers say.

Australia was thought to have remained largely isolated from the rest of the world between its initial colonization about 40,000 years ago by the ancestors of aboriginal Australians and the arrival of Europeans in the late 1800s.

"Outside Africa, aboriginal Australians are the oldest continuous population in the world," said researcher Irina Pugach, a molecular anthropologist at the Max Planck Institute for Evolutionary Anthropology in Leipzig, Germany.

Still,researchers had not really explored the genetic history of Australians in great enough detail to address this question.

"The extent of isolation of aboriginal Australia has been debated for a long time," Pugach told LiveScience. "The Australian archaeological record documents some changes that occur in Australia around 4,000 years ago, which could have been potentially, but not necessarily, brought in from the outside."

The scientists found a common origin for populations from Australia, New Guinea and the Mamanwa, a group from the Philippines. The researchers estimate these groups split from one another about 36,000 years ago. This supports ideas that the groups descended from an ancient southwards migration out of Africa.

The researchers also detected substantial gene flow from Indian populations into Australia about 4,230 years ago. Scientists estimate this Indian genetic influence appears in about 10 percent of the aboriginal Australian populations they analyzed.

At about the same time, the dingo first appears in the Australian fossil record, an animal that most closely resembles Indian dogs.

In addition, at about that time, "archaeologists describe a sudden shift in stone tool technologies, with new implements known as the Small Tool Tradition appearing for the first time" in Australia, Pugach said. These represented stone tools that were smaller and more finely worked than before, she explained. [Marsupial Gallery: Photos of Australia's Amazing Animals]

Moreover, at about that time, new techniques for altering dangerous plants to make them edible also appeared in Australia. For instance, while plants known as cycads can be toxic, soaking or fermenting their kernels can remove the poisons.

"Aboriginal Australians use the fruits of these plants as an important food source despite them being highly toxic," Pugach said.

The researchers caution the migration "may not have actually been from India, but from some population somewhere else that subsequently no longer exists, but whose closest living relative — at least, among populations we examined — are Dravidian-speakers from southern India," Pugach said.

The researchers also emphasized they are not claiming some Indian group members are the ancestors of aboriginal Australians. "The migration happened about 4,000 years ago. By that time, people [had] lived in Australia for more than 40,000 years," Pugach said.

It remains uncertain why this migration might have taken place more than 4,000 years ago. Environmental changes might be one cause, "although I don't know of any significant environmental changes then," Pugach said. Then again, it could "simply be wanderlust. Humans have always liked to migrate, and don't seem to need a reason to want to do so."

Future research can analyze additional Australian populations to see how widespread this Indian influence might actually be.

The scientists detailed their findings online Jan. 14 in the journal Proceedings of the National Academy of Sciences.